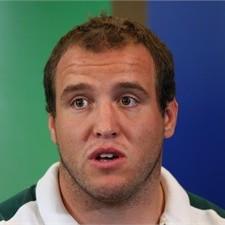 Wallabies are stronger after Irish lesson

Australia prop Ben Alexander says the Wallabies have learned the lessons from their defeat by Ireland and are determined there will be no repeats against the Springboks on Sunday.

The Irish forwards squeezed the highly fancied Tri Nations champions into submission in a 15-6 win at Eden Park almost three weeks ago.

Admitting the Wallabies lost the battle up front, Alexander said: "We have learned our lessons from it and moved on. We know where we went wrong and how we must improve.

"We were beaten to the punch early on. We allowed them to assert their dominance and once you assert your dominance everything goes your way."

"We just must make sure we are not beaten to the punch and make sure we scrum as an eight better than we did," said Alexander.

"South Africa have been scrumming very well since the Tri Nations. They have used it as a weapon and will look to do it again this weekend.

"We have done some hard work on scrummaging and we've started to see some results.

The Ireland game was a bit of a slip-up because the great sides at scrum-time are consistent: they scrum well every scrum, every game and without any backward steps ever."

Alexander said the Wallabies' successes against South Africa in the Tri Nations would count for little when the teams line up for their quarter-final clash at the Wellington Regional Stadium.

"I do not think the Springboks will fear anyone. But I feel confident and ready to face them so, psychological advantage or not, we feel ready and feel prepared to play well and get the job done.

"We have played some good rugby throughout the year. Obviously that counts for nothing as this is a new tournament but we know from the work we have been doing on the training paddock and the work we have done before that we are capable of a good result and we draw on that for confidence."

The Springboks' loss of second row Bakkies Botha to injury was not considered a big factor because of the quality of his replacement Danie Rossouw, he added.

"They are a proud rugby nation, they keep producing one massive lock after another - they have a production line there.

"Danie is a great player. He's an excellent ball carrier and he is just as big and just as physical and has almost played as many Tests (as Botha) so they won't miss him that much."

With a place in the last four to play for, Alexander, 26, realises Sunday's clash will be the biggest match of his life.

"I have never played in a World Cup quarter-final before so I have to dig deeper than I ever have."