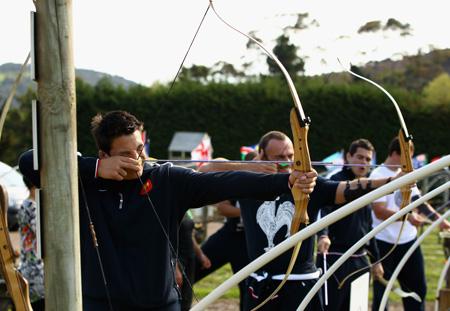 The French Rugby team swapped running drills for relaxation ahead of their Rugby World Cup Quarter Final clash this weekend with a day on Auckland’s Waiheke Island.

The 30-man squad and management team took time out from training to explore the picturesque Island of Wine.

Among those to enjoy them was French captain Thierry Dusautoir who says the visit to Waiheke was a great way to unwind ahead of their must-win match against England this Saturday 8 October.

"Waiheke has a special vibe – it’s a surprisingly beautiful place and was fun to look around for an afternoon. It’s hard to believe it’s such a short distance from a big city," he says.

The team enjoyed a hearty lunch at popular Stonyridge Vineyard, which is one of 30 quality wineries on the island.

While the players passed-up the wine tasting this time around many agreed they’d love to return to sample Waiheke’s red varieties.

The afternoon was topped-off with a competitive round of archery and laser claybird shooting amongst the grape vines at Wild on Waiheke.

Scrum-half Dimitri Yachvili says it was a great way to spend an afternoon away from the field.

"The boys always love a bit of competition and this was so much fun and really different being in amongst the vines," he says.