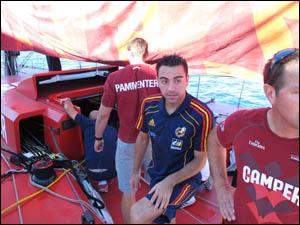 CAMPER with Emirates Team New Zealand had the honour of hosting the world champions of football on Tuesday as the Spanish national team visited the team’s base at the Volvo Ocean Race village. The football squad was relaxing ahead of its Euro 2012 qualifying match against Scotland. CAMPER skipper Chris Nicholson was the first to greet the squad, which included some of the biggest names in world football, such as Fernando Torres of Chelsea, Carlo Puyol, Xavi, David Villa of Barcelona, Iker Casillas, Sergio Ramos and Xabi Alonso of Real Madrid and Liverpool’s Pepe Reina. Nicholson and Spanish sailor Roberto ‘Chuny’ Bermudez led the team on a tour of the boat.

Torres and Xavi were among the first to go below deck, and Casillas expressed his admiration for the crew and how they cope with living conditions at sea after seeing their sleeping bunks and living conditions. Torres told CAMPER media crew member Hamish Hooper that he would love to go racing one day. The 2011-12 Volvo Ocean Race will start with an in-port race on October 29 in Alicante, Spain, and the round the world race, which begins on November 5, will go to Cape Town, Abu Dhabi, Sanya, Auckland and on to Itajai. After Brazil the fleet will visit Miami and then cross the Atlantic to Lisbon, followed by Lorient in France. The race will finish in Galway, Ireland in July 2012. This is the 11th edition of the race, which is held every three years.