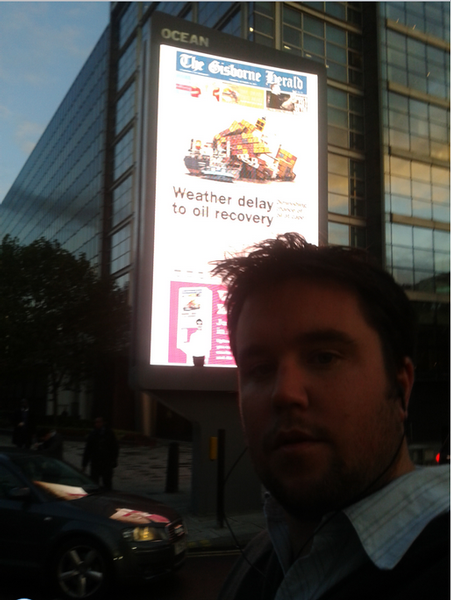 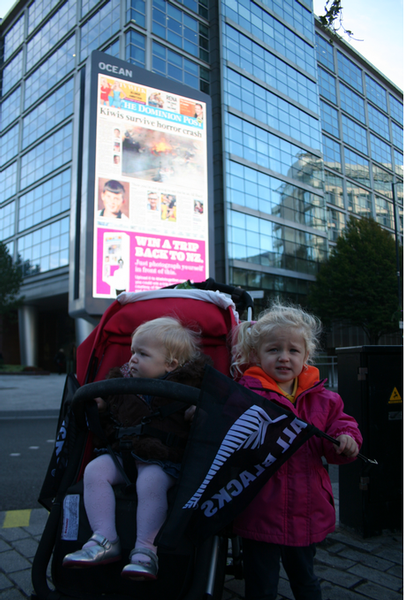 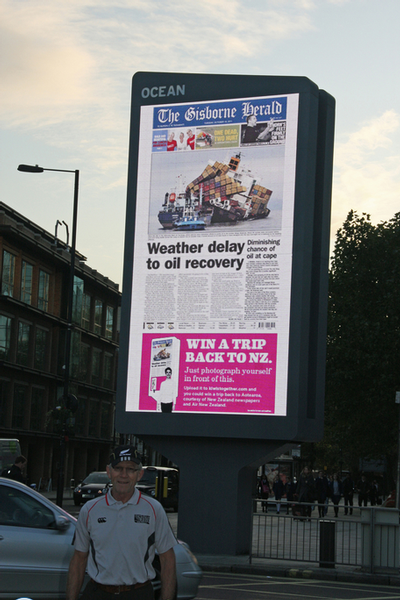 Kiwis in London are flocking to have their photo taken in front of a Hammersmith digital billboard showing front pages from NZ newspapers. Since the campaign started on Monday, front pages depicting Ma’a Nonu scoring a try at the All Blacks RWC semi-final, the fiery Indy 300 car crash, precariously balanced containers on the Rena and floods in Christchurch have brought NZ newspaper front pages to Londoners in spectacular digital colour.

It’s all part of a campaign from the Newspaper Publishers Association to give New Zealanders living in the UK a connection with home during this final week of the Rugby World Cup.

Every day a newspaper front page is selected and shown on the electronic billboard which attracts thousands of pairs of eyes every hour. Kiwis and kiwi-lovers are invited to have their photo taken in front the billboard and post it on the website www.kiwistogether.com to enter a draw to win a return trip for two from London to NZ.

Monday’s billboard was the clever herald headline “Final-ly” from the NZ Herald, while the Dominion Post’s fiery photo of the fatal Las Vegas Indy 300 car crash scored the spot for Tuesday. The Gisborne Herald had a turn on Wednesday with its outstanding photograph of containers on the Rena looking like they were about to all crash into the sea (but somehow didn’t), while Thursday’s selected headline was the Christchurch Press’s photo of the floods in already battered Christchurch.

Tim Pankhurst, Chief Executive of the Newspaper Publishers Association, said the choice of this week to bring newspaper front pages to Kiwis living in London had been well planned, but even so, the high level of interest in the events shown on the front pages had been fortunate.

“To start the week with a fantastic All Black victory, to have floods and fire, plus an extraordinary photo of New Zealand’s worst maritime disaster has really brought home to people the power of newspapers to connect people with their home country,” he said.

“Our objective with the campaign was to reinforce the link with home to New Zealanders living in London; halfway through the campaign, we have been able to do that with all the drama and spectacle we could have hoped for,” he said.

The campaign will continue through to next Monday when the NPA is looking forward to bringing news of an All Black RWC victory to hundreds of thousands of interested Londoners, including Kiwi ex-pats who are relishing the opportunity to post their own photos of the billboard on the competition website.