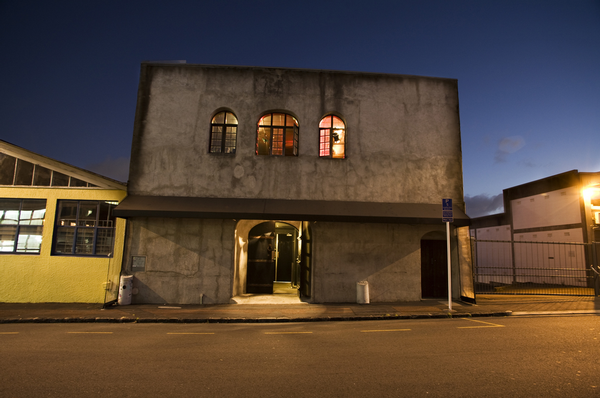 Auckland’s well-known live music venue Galatos, housed in an historic Newton building, is up for sale - with concept plans available for an upgrade.

Owned by the arts organisation MIC Toi Rerehiko, a charitable trust, the freehold, two-storey standalone 578 square metre building, on a 350 sq m site at 17 Galatos Street, is for sale by negotiation through Lisa Nielson, of Bayleys Auckland.

The property was developed in the early 1900s and was originally the lodge for the United Ancient Order of Druids and has subsequently been used as a dance venue and boutique function centre.

In the era it was used for ballroom and big-band dancing, its four inch thick native timber parquet floor was reputed to the fastest among the many Auckland ballroom dancing clubs. It was also previously owned and used by the New Zealand All Golds Cosmopolitan Club as their club rooms.

The modern day Galatos Bar and Venue was relaunched in 1999 as a live music venue and MIC bought the property in May 2005. Nielson says a new owner has the opportunity to buy the land, building and the venue and bar identity.
“This is a huge opportunity for someone else to rebrand the current business. The present owner is willing to help with any transition.”

MIC Toi Rerehiko is a non-profit interdisciplinary media-arts organisation which operates with the support of public, private and corporate sponsors. It has used the Galatos site to promote innovative and unique international and local performance and in the time it has owned the building it has used it for everything from DJs and band performances to film screenings, plays, conferences, corporate functions and film shoots.

Artists who have played at the property include Coldplay, the Foo Fighters, Diplo, Blackalicious, DJ Krush, Cody Chestnut, Freq Nasty, The Mars Volta, Stereophonics and the John Butler Trio and many local musicians have successfully used the venue as a launching pad.

The property has two levels plus a mezzanine floor added around 1912 and these are split into three separate areas with their own entrances but are also have linking stairways to the other levels.

“Uniquely, this building has three distinct entertainment areas which can support a vast array of entertainment options - music, theatrical and dance - with the ability to run individual performances simultaneously or when amalgamated into one venue, can accommodate a crowd capacity of 520,” says Nielson. The property also has a 24-hour liquor license.

The 185 square metre Galatos Basement has a capacity of 100 people. It has a main floor with PA, DJ setup, and a bar, and a side VIP room with booth seats. Nielson says the 298 square metre ground floor consists of a stunning 5.9 metre high stud open space area with its original polished solid wood parquet floors still intact.

It comfortably fits 320 people and is often used for live bands, DJs, screenings, performances and product launches among other things.

This space can easily house lighting rigs and screens and comes with its own in-house lighting and a motorised screen as well as PA and security systems.

On this floor there is also a walk-in chiller, bar facility, toilets and a small entry/reception, with a coat check area, at the front of the building.

The 95 square metre mezzanine floor above is largely open plan with a small office/storage room, a bar and toilets and also has separate access. It has a capacity of 80 people and with its leather couches and gas fireplace is regularly used for more intimate events such as small band showcases, birthday celebrations and after-work or private functions.

Nielsen says the floor would lend itself to possible apartment conversion with mixed-use buildings becoming an increasingly common feature of the Newton area.

The property is for sale with vacant possession and presents a myriad of future options for a new owner, Nielson says.

“This is an ideal opportunity for owner occupiers either looking to reposition their business in a landmark building in a strategic city fringe location or for those who have an interest in retaining the existing iconic Galatos venue and further building its profile in the market.”