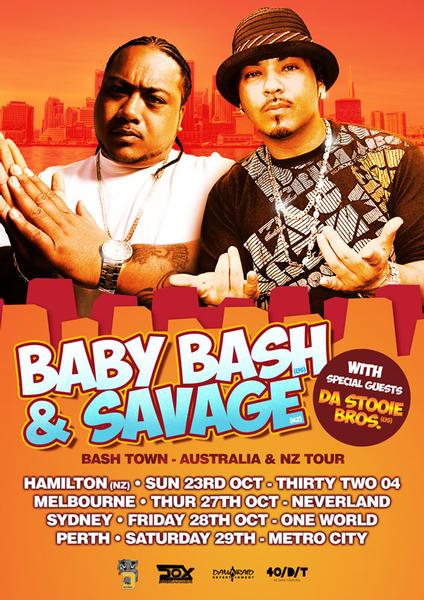 West Coast Hip Hop star BABY BASH is set to hit New Zealand for two shows this weekend, entertaining crowds in celebration of the Rugby World Cup Final. Supported by NZ’s own SAVAGE, BABY BASH will be performing for FREE at the Rugby World Cup Southern Seas fanzone in Mangere Town Centre, Sunday 23 October before the final. They’ll then head to Hamilton’s Thirty Two 04 bar, where they’ll be joined for the post-final after-party by special US guests Da Stooie Bros and local favourite, Frisko. Tickets for the Hamilton show will be available on the door on the night.

BABY BASH cooks up feel-good hip hop peppered with classy R&B bravado, soaring pop melodies and saucy grooves. His alchemy of rap, reggae and Latin styles has made BASH one of the most sought-out producers and writers in the game, leading to collaborations with everyone from Carlos Santana and Whitney Houston to Flo Rida and Lloyd.

BABY BASH made a big splash in 2003 with his debut Tha Smokin' Nephew. His 2005 sophomore smash, Super Saucy, yielded the mega-hit "Suga Suga," featuring longtime collaborator and friend Frankie J. The song lit up the airwaves and the dance floors. Another big single alongside Akon, "Baby, I'm Back," which is recently on the motion picture “The Karate Kid” , Bash solidified himself as a live presence on a highly successful tour. He has also appeared in "Obsession," a massive hit from Frankie's platinum record The One. His new album Bash Town was released in March this year, featuring the radio smash hit “Go Girl” feat. E-40.