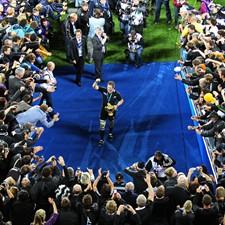 The All Blacks paid tribute to their adoring public after riding a wave of popular support to victory in the RWC 2011 Final on Sunday night.

Richie McCaw and his team were roared on by a black and white army who formed the bulk of the Eden Park crowd of 61,079.

And their role in helping the team lift the Webb Ellis Cup for the first time in 24 years was acknowledged by coach Graham Henry and his players.

"The people have been outstanding in support of this team and of this Rugby World Cup," Henry said. "I'm so proud to be a New Zealander standing here."

The All Blacks were lifted by the nationwide support throughout the tournament and replacement scrum half Andy Ellis marvelled at the fans' devotion to the cause.

"I didn't realise how intense it would be," he said. "The team bus was going 10km an hour down the main stretch (on the way to the stadium) because so many people were on the street."

Captain McCaw said the 8-7 victory over France was sweet for players, management and supporters alike.

"It was 30 guys and the management and everyone played their part, and it's hard to describe," he said.

"But around New Zealand people in the streets have supported us so much and it's great that we could repay them."

The All Blacks will now take their celebrations around New Zealand. Following a victory parade in Auckland on Monday, they will head to Christchurch on Tuesday for another procession.

On Wednesday the players will parade the Webb Ellis Cup in Wellington. It promises to be quite a week.