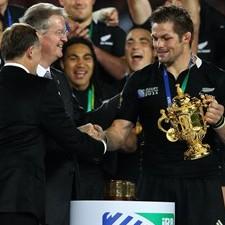 The Frenchman also stated that the tournament has achieved the key goals of furthering the profile of Rugby and New Zealand around the world.

New Zealand’s 8-7 victory over France in the Rugby World Cup 2011 Final brought down the curtain on a tournament that achieved all ticketing, sponsorship and broadcast targets as more than 100,000 international fans joined New Zealanders in attending matches at Rugby’s showcase event.

“New Zealand 2011 will be remembered as an exceptional Rugby World Cup. It has been a tournament where New Zealand’s rich culture and heritage has gone hand in hand with Rugby’s tradition and values.”

“New Zealanders should be proud of their event. They made it special by embracing the tournament the length and breadth of the country, welcoming all 20 teams and 100,000 international visitors with open arms. It was quite remarkable."

Lapasset also praised the Tournament Organisers and the spirit of close collaboration that has delivered one of the great Rugby World Cups.

“I would like to extend my heartfelt thanks to Brian Roche, Martin Snedden and the Rugby New Zealand 2011 team, the New Zealand Rugby Union and the Government for their vision, dedication and hard work in delivering Rugby World Cup 2011 in partnership with the IRB team.

“Their reward is the successful hosting of what will be remembered as one of the great Rugby World Cups, a sporting and operational success.

“New Zealand 2011 has positioned the country as a major event host, a superb tourism destination and a great country. It has also taken our sport to new audiences and has set the bar for future hosts.”

An independent study commissioned by MasterCard during the tournament has indicated that the event is due to deliver NZ$750 million in direct economic benefits for New Zealand and more than NZD$2 billion in long-term benefits.

“The significant economic benefits demonstrate the true value of Rugby World Cup to a host nation, its Government, tourism and business sectors. The great thing about New Zealand 2011 is that there will be no ‘white elephants’. The legacy is clear and long lasting.”
The Tournament will also deliver the financial platform for the International Rugby Board to continue to invest funds that are vital to the growth and prosperity of Rugby worldwide.

Revenues from the Rugby World Cup 2011 commercial programme, including broadcast, sponsorship and travel and hospitality will deliver an estimated £80 million net surplus boost to the Game.

Rugby World Cup accounts for 95% of the IRB's revenues. In the 2009-2012 investment cycle the global governing body is investing GBP150 million to develop and grow the Game around the world in order that future Rugby World Cups are more competitive and that more men, women and children can play the Game.