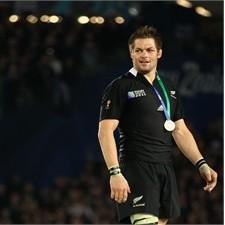 Twenty countries, 600 players, a stadium of four million and more cameras than blades of grass on the Eden Park pitch.

It all added up to six weeks of Rugby World Cup 2011 being an unforgettable experience that will live on forever in the hearts and minds of participants and spectators.

And all of it was captured in the most minute detail by a monster regiment of top-class photographers.

They snapped everything from the trophy to teams training, fans in fantastic colourful outfits to fireworks at the opening ceremony.

Almost 2,000 pictures have been published on the RWC 2011 website and everyone who viewed them will have their favourites.

No two people, let alone the millions who viewed them, will agree on which were the best. That is a matter of personal opinion.

The following small selection are among those we liked most and are a mere 1.5 per cent of the total number published.

They are the essence of RWC 2011 and also a tribute to the skill and dedication of the people who took them.

Symbols of a nation: New Zealand captain Richie McCaw stands in front of the All Blacks emblem as he answers media questions before the tournament kick-off

Child's play: A young fan with a painted face waits for Fiji to arrive in Auckland. Soon thousands of children wanted to visit a face painter

Hair-raising: Nathan Sharpe looks as if he has sprouted a mane but is merely standing back to back with Wallabies teammate Radike Samo

Light fantastic: A spectacular show of fireworks explode over Auckland city and harbour to mark the opening of Rugby World Cup 2011

I cry for you Argentina: Juan Jose Imhoff watches Alejandro Campo and Mariano Galarza weep as their country's national anthem is played

Men at arms: A stunning back view as USA players lock arms to form a scrum during their match against Ireland

A leap in the dark: Wales's giant lock Luke Charteris rises high into the gloom in Hamilton to win a lineout ball

Beyond the pail: Samoa fans sweat buckets with their headgear and pipe insulation

Bold as brass: Band members are instrumental in entertaining fans as they stop playing to do a haka before the start of the Argentina v England match

Missed by a foot: Quade Cooper fails to stop Israel Dagg as the All Black breaks forward during the semi-final showdown

Blurred vision: Fleet-footed Takudzwa Ngwenya of USA has two Irish players in a bit of a spin as they go in hot pursuit of him

Shadow the opposition: England players line up in the early morning sunshine to train at Mt Smart Stadium in Auckland

Aaawwww, that's so cute: A kissing English couple let the world know they are just married. Alas they did not get the present they wanted - England lifting the Webb Ellis Cup

As close as three coats of paint: France fans become a walking flag for the night at the match against England

Maul shook up: Will Genia is crushed as Australia lose to Ireland. Credit: INPHO

Hand of Hape and glory: Shontayne Hape stretches out to score his second try during England's victory over Georgia in Dunedin

One four all: All Black Piri Weepu pits his wits against a quartet of Argentina players and he emerges from the quarter-final match as his country's points hero

Caught shorts: Italy's Luke McLean has his attempt to race clear halted by a flying tackle

Flying start: Sergio Parisse dives between the posts to give Italy an early lead in their match against USA

Fly boy: Chris Ashton of England scores his second try against Romania with his trademark dive

Guerilla knitting: A knitted Dan Carter doll has appeared on a railing at the Devonport ferry terminal

All black and white: The All Blacks perform the haka before their semi-final showdown against Australia