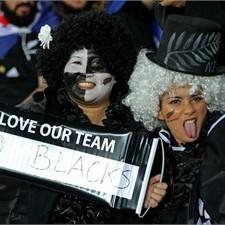 All Blacks fans send a message to their heroes before Sunday's match CREDIT: Rugby World Cup 2011

When Craig Joubert’s whistle brought Rugby World Cup 2011 to a finish and ended a 24-year wait for New Zealand to win their second Rugby World Cup, it set off a series of celebrations the length and breadth of the nation.

On the field Graham Henry’s side were able to celebrate an 8-7 win over France that was the culmination of eight years' hard work under his direction as coach of the All Blacks and meant Richie McCaw lifted the Webb Ellis Cup.

The world's rugby carnival consisted of 48 matches in a little over six weeks. Some of these were predictable, with the lesser nations often laid to the sword by the youthful dominating aristocrats of the tournament, although there were some spirited performances from the likes of Japan and Romania early on.

Russia, at their first World Cup, secured their first point, a bonus point in the 13-6 loss to the USA, and the re-emergence of Pacific sides Samoa and Tonga, although they failed to make it beyond pool play, was a positive that matched the fanatical support these two small countries enjoyed.

The southern hemisphere triumvirate of South Africa, Australia and New Zealand were expected to rule the roost. But Ireland put that prediction out the window with their 15-6 pool win over Australia, and Wales came within a point of the reigning champion South Africa.

France, up until the final, disappointed, and lost to Tonga in their last pool match. They got to the final at the expense of a disappointing England and arguably the darlings of the RWC, the 14-man Wales, by taking a pragmatic approach in the semi-finals.

Wales fielded some of the exciting youngsters in the tournament. Wing George North scored a hat-trick of tries against Namibia and at just 19 was a constant thorn in the side for all who encountered Wales.

Another who received big praise was the bustling Toby Faletau, who filled a number of roles, including his normal number 8 and in the backs at times.

At 23, Sam Warburton, the Wales captain, has an old head on young shoulders and received praise throughout the RWC. He made a tackling error in the semi-final against France, which resulted in him being sent off, but he had already cemented his place as a dominant openside flanker for many years.

For England, 20-year-old centre Manu Tuilagi was a bustling menace to the opposition and England will be happy to retain his power in the future.

Only three of the New Zealand side that lost 20-18 to France in Cardiff in 2007 were in the starting line-up, while those that came into the side in the subsequent years became key figures.

Piri Weepu missed RWC 2007 for 'form and attitude' reasons, but the reformed scrum half became the team’s talisman following Dan Carter’s injury in the pool stages and took over his goalkicking duties and role as the team’s tactical brains.

In the back row, Jerome Kaino drove the team’s defensive efforts to such an extent he was shortlisted for the IRB Player of the Year award.

Number 8 Kieran Read, meanwhile, missed the opening matches, but returned from injury for the final pool match against Canada. He gave New Zealand some much-needed control at the back of the scrum and relieved the pressure on McCaw.

RWC 2011 marked the end of the international road for several eminent players. Among them was Brad Thorn, the former Australia rugby league international, who decided to give his country of birth and its national sport a spirited, though interrupted, service in the second row.

Fellow second rows, South Africa's Victor Matfield and Australia's Nathan Sharpe (100 Tests), have also bowed out after some sterling service to their countries, including intermittent spells as captains.

Brian O'Driscoll, the effervescent captain of Ireland, had a more enjoyable time at the RWC than as captain of the 2005 British and Irish Lions to New Zealand. On that occasion, a tackle in the early minutes of the first Test spelled the end of his tour.

Memorable at RWC 2011 was his leadership and try-scoring in the crucial final pool match for Ireland, against Italy, when both countries were vying for the final quarter-final berth.
Evergreen Argentina hooker Mario Ledesma, at 38 the oldest player at the tournament, has called it a day after enjoying a fine RWC that ended in a closer-than-expected quarter-final loss to New Zealand.

Another 100-Test veteran, Mils Muliaina, has retired just as his star was receding. Israel Dagg has taken over Muliaina's full back berth, a hard, consistent act to follow.
England's Lewis Moody has retired after leading a disappointing series and joining him is long-serving Welshman Shane Williams.

On the coaching front, Peter de Villiers had indicated he was retiring, but then seemingly changed his mind. He was good value at RWC 2011 for his verbal jousts, mixing his eccentricity with some enjoyable humour.

Marc Lièvremont, gallant and gracious in the Final defeat, has retired and there are question marks over New Zealand's Henry (although assistant Wayne Smith has gone), England's Martin Johnson and Argentina's Santiago Phelan.

France’s major change came ahead of their pool clash with the All Blacks when Lièvremont decided to pair two scrum halves together: Dimitri Yachvili at scrum half and Morgan Parra at fly half.

It may have started slowly, with New Zealand winning that match 37-17, but Lièvremont was happy enough to continue with the pair together for the rest of the tournament, although tellingly, in the Final Parra was injured and Yachvili had a relatively mediocre match before being replaced in the second spell.

In the Final, Stephen Donald's penalty in the 46th minute made the vital difference after prop Tony Woodcock had scored the opening try in the first half.

France captain and man of the match Thierry Dusautoir, pulled a try back that François Trinh-Duc converted, but Les Bleus were unable to breach the All Blacks' defence a second time.

Off the field New Zealand were able to celebrate a successful hosting of the Rugby World Cup. They were hosting duties that the whole of the country embraced and contributed to.

From Invercargill in the south to Whangerei in the north, teams and fans were given a warm Kiwi welcome as the people of New Zealand opened their homes and hearts to the world.

It meant that visiting supporters were left with memories of a fantastically well-organised tournament in which their chief concern was simply getting to their seat in time for kick off.

"It has been a tournament where New Zealand’s rich culture and heritage has gone hand in hand with rugby’s tradition and values.

“New Zealanders should be proud of their event. They made it special by embracing the tournament the length and breadth of the country, welcoming all 20 teams and 100,000 international visitors with open arms. It was quite remarkable."

For Lièvremont, in his last campaign as France coach before handing over the reins to Philippe Saint Andre, the tournament was a mixed bag.

Early on he hit back at journalists after the loss to the All Blacks with, "Go to hell with your question. The goal was and still is to qualify."

Later on he berated his team for walking away when he bought them all drinks following their shock defeat to Tonga, then despaired after they went out and celebrated their semi-final win over Wales.

Such behaviour reminded Lièvremont of RWC 1999 when France’s players - he among them - celebrated their semi-final win over the All Blacks in grand style and then went on to lose to Australia in the final.

Elsewhere, teams who backed youth reaped the benefits. Chief among these were Wales and Australia, who rode a wave of youthful enthusiasm to the semi-finals.

Wales gave notice of their intentions when they ran defending champion South Africa desperately close in their opening match. Even though they lost 17-16, the likes of Warburton, Jamie Roberts, North, Faletau and Rhys Priestland signalled their quality.

After Australia started their campaign with a four-try win against Italy, they were shocked to lose 15-6 to a rampant Ireland side that dominated up front and kicked their points when they had the chance.

Ireland’s win gave them top spot in Pool D and a quarter-final meeting with Wales in Wellington. This time, though, it was Wales’s defence that won out. Second row Luke Charteris typified the level of desire with 16 tackles in the first half alone. Not only was Ireland's attacking threat nullified, they were continually pushed behind the gain line.

In total, they missed only 13 of their 147 tackles in a match in which The Springboks enjoyed 56 per cent of possession and 76 per cent of territory.

James Horwill scored the only try of the match, but it was a nerveless kick from namesake O’Connor eight minutes from time that secured the victory.

England manager Johnson may also have been thinking along similar lines after France ran riot in the first half of their quarter-final to set up a 19-12 win.

Captain Moody arrived injured and appeared far from his best. It was a similar story for the likes of Jonny Wilkinson, Mike Tindall and Nick Easter, players from the victorious RWC 2003 team and the one that reached the final in France.

Los Pumas reached the knockout stages for the third tournament in four, but came up against New Zealand in the last eight.

The South Americans stayed with the All Blacks for the first hour. They scored the opening try through Julio Cabello, but Weepu held his nerve with the boot and Read and Thorn went over for late tries in the 33-10 victory.

Argentina’s progress to the last eight will have given them confidence ahead of their entry to the Four Nations in 2012, though they will do so without Rodrigo Roncero, Mario Ledesma and Martin Scelzo. For the winning coach Henry, RWC 2011 was one last chance for him to win the Webb Ellis Trophy after attempts with Wales in 1999 and New Zealand in 2007.

His partnership with captain McCaw underpinned the whole effort and while the rugby was not as spectacular as some that they played since they teamed up in 2004, it was enough to leave a smile throughout the whole of New Zealand.

"It wasn't the prettiest performance, but we had to have courage and the desire to win," McCaw said.

"The boys put a lot of effort into getting into this position and we didn't want to let it go. Last week (against Australia) we played the rugby we know we can play and today was about hanging in there. I take my hat off to all the men."