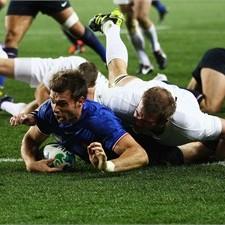 836 - Caps in the South Africa starting XV for their quarter-final against Australia - the most capped line-up in Test history.

92 - Points scored by Italy in their four pool matches, the most by a team that failed to make the quarter-finals.

87 - Points scored by South Africa in their pool match against Namibia, the highest score in a RWC 2011 match.

72 - Minutes Ireland trailed during their quarter-final loss to Wales, compared to the five minutes they spent behind in the whole of the pool phase at RWC 2011.

23 - Canada and Japan drew 23-23 in John Kirwan's 23rd Rugby World Cup match as a player or coach. Kirwan's 23 matches is a record which was equalled by England's Martin Johnson in their quarter-final loss against France.

21 - Players to have played 100 Test matches after All Blacks Richie McCaw and Mils Muliaina and Wallaby Nathan Sharpe reached that milestone during RWC 2011.

20 - Match points scored by New Zealand in the pool phase of RWC 2011. They were the only team to win all four of their matches with a bonus point.

19 - George North, at 19 years and 166 days old, became the youngest RWC try scorer when he touched down against Namibia.

17 - Starters in the Ireland v Wales quarter-final who toured South Africa with the British and Irish Lions in 2009.

14 - The record for most RWC matches refereed. Set by Alain Rolland in the RWC 2011 semi-final between Wales and France.

13 - Tries scored by New Zealand in their match against Japan, the most tries by a team in a RWC 2011 match.

12 - Place kicks attempted by USA (four conversions and eight penalties) at RWC 2011, the fewest of any team.

11 - Penalties kicked by Kurt Morath and Piri Weepu, the most of any players at RWC 2011.

9 - Conversions kicked by James O'Connor against Russia and Colin Slade against Japan, the most by a player in a RWC 2011 match.

8 - New Zealand's score in the RWC 2011 Final was the lowest winning score in any RWC match.

7 - The record for most matches refereed at one RWC. Set by Craig Joubert in Sunday night's final.

6 - Tries scored by Chris Ashton and Vincent Clerc, which equals the record low for top try-scorers, set at RWC 1987 and RWC 1991.

4 - Most tries scored by a player in a RWC 2011 match - Vereniki Goneva for Fiji against Namibia and Zac Guildford for New Zealand against Canada.

3 - Three of the four pool winners were knocked out of RWC 2011 in the quarter-finals, the most to lose at that stage in a RWC.

0 - Points scored by Namibia and Fiji in their pool matches against South Africa and Wales respectively.