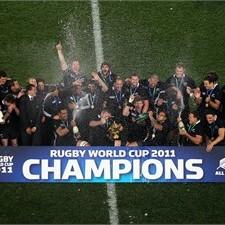 What a party! Oh what a glorious party. RWC 2011 Finals week was massive. Fans from around the world arrived in Auckland for the Bronze Final on Friday night with Wales losing to Australia and the Grand Final on Sunday night where New Zealand beat France by one point.

Over finals weekend more than 300,000 tweets were posted plus 1,000's of pictures, videos and blog posts. On Sunday night with half an hour before kickoff "Go Allblacks" was trending in 9th place worldwide. More than 150,000 tweets mentioned "RWC 2011" or "RWCFinals" on Sunday. Popular topics on Twitter make the worldwide trending topics list. On Sunday "#RWCFinal' was the 2nd most popular trend in the world for several hours with "Congratulations New Zealand" trending around 6th place.There were more than 90,000 mentions of "New Zealand" on Twitter made in the 6 hours around the final, that's great advertising for New Zealand.

On Friday night Australia and Wales played off for 3rd and 4th. Australia won an eventful match. This snapshot was taken 30 minutes into the first half. The Bronze Final generated more than 80,250 tweets. The RWC 2011 Final was an epic battle. This snapshot made after the final whistle shows the words people tweeted along with either 'France' or 'AllBlacks'. In the final week more than 80,000 tweets mentioned the All Blacks. After the final whistle had blown and the All Blacks received the Webb Ellis Cup, the All Blacks Facebook page was updated. This update took seconds to become the most commented and liked post of the RWC 2011. If you were at the Final or semi-finals you can tag yourself at in the RWC 2011 Fan Cam. Find yourself in the crowd at Eden Park. The Fan Cam creates a 360 degree photo of the stadium during the match. You can zoom in and find where you were sitting, tag yourself and share the location via facebook, twitter or email. Visit www.rugbyworldcup.comk/fancam.

For the first time the Rugby World Cup has been influenced by social media and social networks. Every day 1,000's of pieces of content are created, shared, liked and commented on. On Facebook the RWC 2011 page was receiving on average 2,700 comments or likes per post. They gained more than 25,000 new fans over the last 7 days and have gained almost 100,000 fans over the last month.

With 1,453,916 fans at the point of writing this article the RWC 2011 have a fantastic social space to hand over to England for RWC 2015. On Twitter, Sunday's final generated more than 150,000 tweets. Over the whole tournament tweets mentioning all RWC 2011 hashtags, the word 'Rugby' or any of the teams have exceeded 4.1 million.

The good news is that in four years we can do it all again in England. RWC 2015 won't need to start new accounts as over the next few months all the official Rugby World Cup social network profiles will be transferred to them. So stay following your favourite teams and players. Congratulations to the All Blacks, well done to all New Zealander's for a fantastic tournament and thank you for checking in on our weekly Social Media round ups.