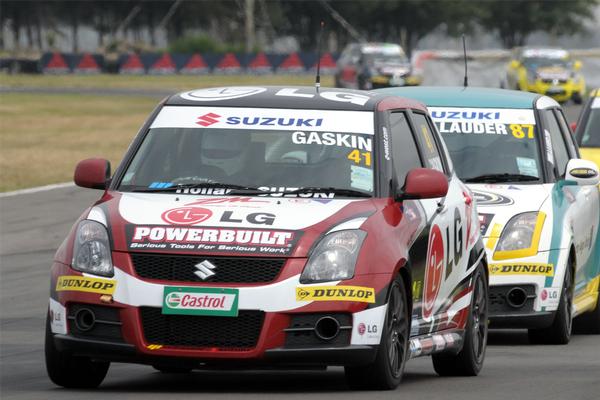 New Zealand’s leading small car brand Suzuki is set to embark on its fifth season at the top-tier of the summer car race championship series, starting at Pukekohe on 4 November 2011.

Famed for its close and competitive racing, the Suzuki Swift Sport Cup will have a number of new driver’s series co-ordinator Paul Burborough says is sure to create fireworks during the milestone season.

“The combination of new drivers, rookies and returning campaigners will be like mixing sherbet in to the chocolate cake mixture: we know it’ll be a treat with some interesting and exciting results,” says the Hamilton based businessman.

“What adds to the equation is the depth of new talent that’s signed up. Castrol scholarship winner Kent Yarrell from Auckland is one we expect to appear at the front, making it hard for those who have returned with the quest of being the season champion.

Contested over six rounds, the series concludes at Taupo on 11 March 2012. Other stops on the five month tour include Christchurch, Invercargill, Timaru and Feilding.

“It’s been a busy off-season,” added Burborough. “We had one driver pretty much confirmed from the northern hemisphere, but late date clashes resulted in the contract going unsigned. So it’s been a challenge to get people in when others drop out. That’s left some racing to get backing in time to start the first round.”

“Taupo brothers Mark and Rob Gibson raced at the pointy end last season along with Turua teen’s Brad and AJ Lauder,” continued Burborough. “Add Upper Hutt’s Jamie Gaskin, Hamilton’s Shaun Lawrence and Rangiora’s Chris Cox, are seven who have previously been at the front at one stage or another.

“Auckland’s Simon Evans will also race some rounds, along with Taupo’s Craig McRae. That doesn’t leave any room for a clear leader. Then add other drivers’ who have committed. Some are excitedly anxious at what lays ahead. It’s their step in to the big league, in front of television and spectators expecting entertainment. Plus the close racing, some really get worked up at the proximity of cars around when you’re giving 100% and not being the weakest link in the chain. We’re going to need plenty of panels to cover the pushing and shoving for position.”

Other new entrants for this season include former Formula Ford driver Andrew Vincent from Karaka and 18-year-old Joseph Paton from Oamaru, racing with support from Frosty Boy.

Recently ranked the number one selling new small car in New Zealand, the Suzuki Swift has credited a part of its success on the racing formula says its local Motorsport manager Darren Stevens: “Offering affordability, quality racing and being part of a progressive path for drivers’ are key objectives in attracting new talent. Plus relationships with the likes of 2XU clothing (two-times you) and the Gridkids Duathlon series, which rubs off in raising our brand awareness, ultimately improving our core business: selling cars.

“Being road going race cars further improves our performance and reliability status; they are the only cars in the racing series you can drive to and from the race track. And being identical in specification keeps the onus on driver ability, including the limited car setup to fine-tune handling for each track.”

“As much as we like to keep a couple of cars spare in case of damage we’ve got a couple more spaces available on the grid. It’d be a great birthday present for someone who wants to start some close competitive car racing,” added Stevens.

The first race for the 2011/2012 season starts early Saturday afternoon 5 November, with a further two races on the Sunday to decide the opening round winner and early championship leader.