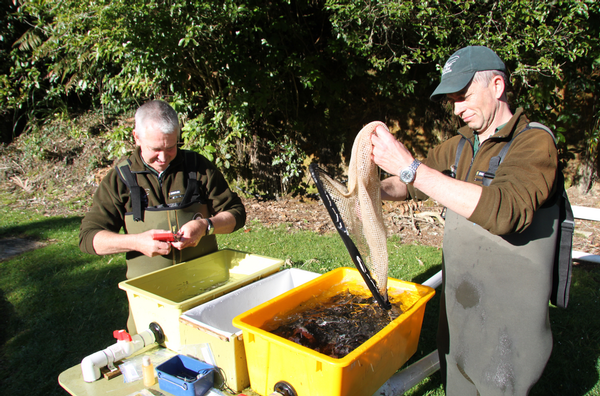 One year old fish are tagged at Fish & Game's hatchery in preparation for their release. CREDIT: Fish & Game NZ

Lake Tutira’s trout population is about to take a leap with the release of thousands of young trout.

The release has a different twist this year, as 150 fish will be put into neighbouring Lake Waikapiro – to mark the 150 year anniversary of Fish and Game work. This lake is separated from Tutira by a 15 metre wide causeway.

Fish & Game Regional Manager Peter McIntosh says the Waikapiro move is in recognition of a tremendous amount of work done over 30 years to introduce and manage a variety of species – both valued fish species like trout, and game birds.

“The early work was done by acclimisation societies dating back to the 1800’s, which then morphed into Fish & Game as we know it today.

“Some of what Fish & Game does happens a little under the radar as far as the public is concerned, “ Peter adds. “ The organisation goes in to bat in submissions to councils and takes other initiatives to champion the protection of wetlands and water quality issues.”

This work has focused on rivers and lakes right around the Hawkes Bay and the end result is improved recreational opportunities for all users, from fishers to water sport enthusiasts, he says.

“A good example of these efforts was Fish & Game’s work in support of getting a Water Conservation Order in place to protect the Mohaka River and its tributaries - much loved by fishers, hunters and trampers - under threat from both pollution and a proposed dam.”

Peter McIntosh says that Tutira School has been invited to send a group of students along to Friday’s fish release to help hold the pipe and learn about stocking the lake.

“Going by last year, the children not only have a great time but learn some valuable facts about how trout get into the lake and grow.”

The fish are being taken to Hawkes Bay aboard the ‘Live Trout Truck’ from Fish & Game’s Rotorua hatchery, where about 100,000 fish are raised annually for release into lakes around the North Island.

Peter McIntosh says 500 of the rainbows have been tagged along with the 500 brown trout. Fish & Game asks anglers who catch the tagged trout to send the tag in with information about where the fish was caught and how much it weighed.

Those who send in tags are entered in a draw to win their next year's licence and the data gives Fish & Game valuable information on growth rates of trout.

Reporters and photographers are invited to attend the fish release. The Trout Truck is due at about noon, Friday 28th October.