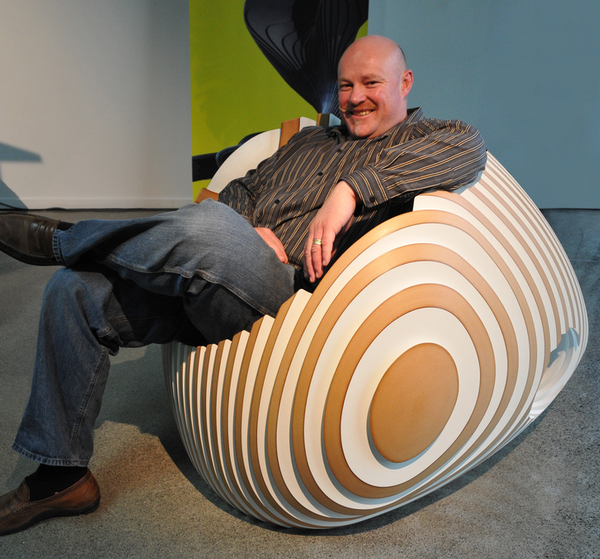 A chair shaped like a beehive and another representing ocean waves have been named as the two winning entries in the inaugural Formica Formations Design Competition.

Launched by The Laminex Group earlier this year, the Competition challenged New Zealand’s professional as well as emerging architects and designers to design a sculptural piece of furniture.

The owner of Queenstown architectural design firm Structural Integrity, Graham Roebeck, was awarded first place in the professional category of the Competition, while top spot in the emerging designer section went to Unitec student Norman Lin.

Graham who is an architectural designer with seven years experience, created the ‘Beehive’ - a striking chair comprised of curved white Formica.

He said after deliberating over several complex designs, he finally settled on the Beehive aiming for a simple but aesthetically pleasing look.

“I drew inspiration from a number of objects including a guitar pick, egg and water gourd.”

Norman’s piece, named ‘The Lax Chair’, represents ocean waves and aims to create a feeling of calmness, relaxation and recovery.

“Approaching this design, I knew I wanted to challenge the typical horizontal and vertical use of Formica materials and design something that allowed Formica to branch out and move into curvilinear designs. I began looking at curved objects - eventually drawing inspiration from waves and Maori motifs.”

Norman said he settled on a design that resembles the way waves weave into each other creating an interesting flow of curves.

The Laminex Group Sales and Marketing Manager, Nicky Duggan, said she was delighted with the quality of entries received.

“The judges had a tough choice. There are a number of very talented and creative professionals in this country and all of the entries were of an exceptionally high standard. In the end, it came down to the finer points and attention to detail.

“We were looking for designs that met the brief which was to design an object that could be sat, laid, leaned or played upon. It also needed to challenge the norms of Formica materials, and demonstrate creative and innovative thinking.”

Both chairs were fabricated by The Laminex Group and are now on display at the organisation’s Auckland office for viewing Monday-Friday from 1.30-4.30pm until the 18th November.