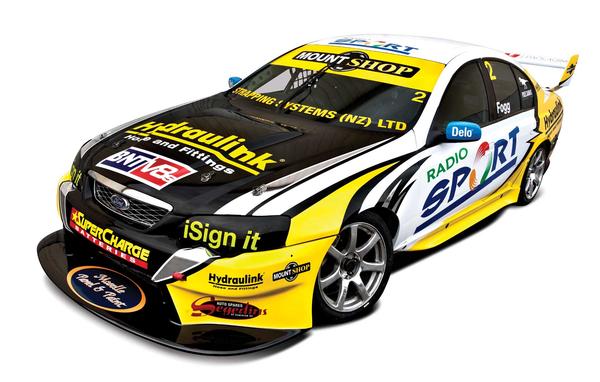 The Birkenhead based 44-year-old race car engineer had the title wrenched from his grip at last season’s Hamilton street race weekend, a blow he says has improved his chances for the 2011/2012 championship season.

“Lessons learned put us in a stronger position now, leaving no stone unturned both from the technical and mechanical viewpoint. It’ll be a case of go hard or go home,” says Fogg.

“Our strategy of collecting as many points as we can and keeping out of trouble worked perfectly well last season, until Hamilton. So we know what we need to do to lead the series, but being who I am I cannot have a bit of a crack can I?” quipped Fogg. “It’s just my nature to get in there and muscle for the lead, but it has to be tempered.”

The six round BNT V8s championship season starts at Pukekohe with three rounds in the North Island and three in the South Island. The series concludes at Taupo on 11 March 2012.

“Certainly in the reverse grid there are a lot of unknowns, new drivers that I don’t know, how they drive, plus the pit stop races add a new angle,” describes Fogg of changes to the programme format.

With qualifying and the top-ten shootout on Saturday afternoon, all three weekend races take place on the Sunday.
Starting with a 12 lap race in the morning, the second 12 lap race will have the top-ten positions reversed. The weekend final is extended to 22 laps, including a compulsory pit stop.

His ninth season in the touring car race series, Fogg’s frequent race wins and consistent podium finishes rank him strongest of the 14 entered to the series opening round.

However it’s the team Fogg says is their strongest link. Campaigning last season’s Ford BA Falcon, the only change to their team and personnel is their prime backer:

“With the change of direction from our last season’s main sponsor it made us more determined to get a stronger package for this season. Some of our backers have stepped up their commitment, ones that have been with us for a few years. In particular, Radio Sport. They’re nationwide and New Zealand’s only dedicated sport network. Their strong quality following is a great fit for what we do and we’re looking forward to giving them some exciting news during the season. No more second places.”

The new-look Radio Sport Falcon debuts late Friday afternoon 4 November with two test sessions before Fogg gets to take promotion winners for a hot-lap ride of the 2.82km circuit late in the day.