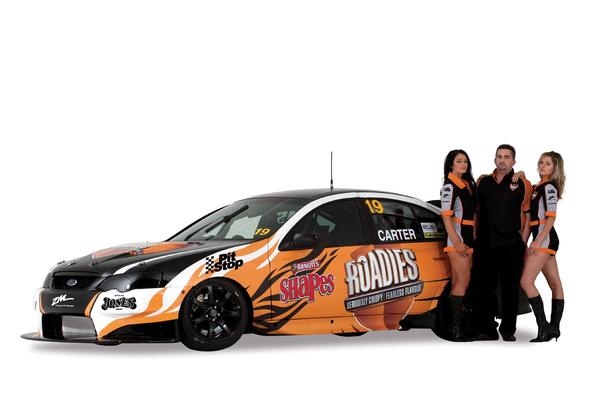 Auckland's Dwayne Carter kicks off his rookie season in the six-round BNT V8s series at Pukekohe this weekend backed by Roadies from Shapes. CREDIT: Lance Hastie

New Roadies from Shapes take to the race circuit this weekend

New Roadies from Shapes will be behind drivers Dwayne Carter (Auckland) and Jamie Gaskin (Upper Hutt) when they launch in to this weekend’s opening round of the 2011/2012 summer motorsport championship series at Pukekohe.

Competing in the BNT V8s and Suzuki Swift Sport Cup respectively, the duo is backed by the new range of flavoured snacks from Arnott’s.
Starting on Friday 4 November 2011, the sign-wrapped Ford V8 touring car and Suzuki Swift sport car begin a six round nationwide championship. The series concludes in Taupo on 11 March 2012.

“We’re excited to watch the team in action this weekend at Pukekohe and look forward to seeing them do well in their respective championships throughout the season.”

Along with Carter and Gaskin, the team also includes drag racer Morice McMillin and Roadies Girls Regan and Sheli.

“The championship is a step up from the endurance racing I’ve done and I’m looking forward to that part of it, especially in my Roadies BA Ford Falcon,” commented Carter.

“We had a bit of fun at the photo shoot earlier in the week, got to meet Morice the drag racer and the Roadies Girls, who are going to help with our season.”

“Now I’m focused on winning the rookie title, after that we’ll see where we line-up against some of the best touring car drivers in New Zealand.”

“As a driver my goal is primarily to win the championship…and do so in my new Roadies branded car,” says Gaskin.

“It’s great to be associated with the Arnott’s brand . I think the whole team quite excited with the new Roadies car signage, and it’s something people will remember when they leave the track.”

Both drivers have three races spread across Saturday 5 November and Sunday 6 November around the 2.82km Pukekohe circuit. The resulting championship points rank them for the round accolades.