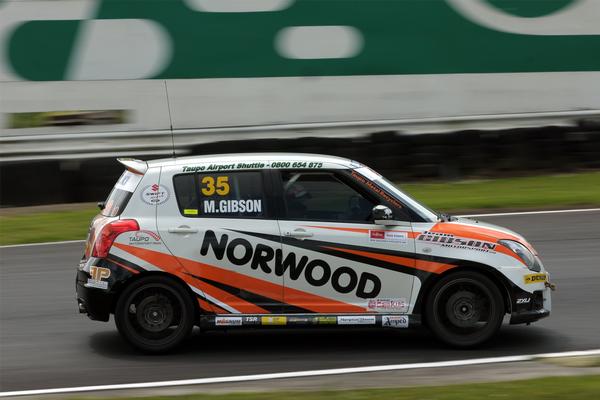 Taupo’s Mark Gibson took a comfortable opening race win, after setting fastest time in the morning qualifying for the first round of the 2011/2012 Suzuki Swift Sport Cup series race at a damp Pukekohe race circuit.

Heading the 13-car field for the first of three races on the 4-6 November weekend programme, 19-year-old Gibson finished two seconds ahead of Turua’s AJ Lauder and Auckland’s Simon Evans, in third.

Tempered with fine breaks during the day, the clear warm morning qualifying was stark contrast to the race start, when heavy rain began to fall just as the cars were to line up on the grid. With a number of the drivers new to the small car 1600cc series, the anxiety levels began to multiply as officials shortened the drivers’ allocated grid preparation time.

“It was a very touch and go start with the rain coming in so heavily, which really upset the promotional girls who were trying to brave the conditions,” said series co-ordinator Paul Burborough.

“Then it was a heart swallowing moment seeing them pile in to the first turn blanketed by the mist they all generated. It’s a real credit to them all they got through cleanly and competitively. They kept their composure, did their best to keep their positions and drove smart.”

Thames teen AJ Lauder made a better start in the wet and led the field through the first turn. Pole sitter Mark Gibson quickly retook his early advantage, leaving Lauder to defend a challenge from Rangiora’s Chris Cox and Hamilton’s Shaun Lawrence.

“Chris Cox made a bit of a mistake that allowed me to pull a bit of a gap for me to stay far enough ahead from there,” said race winner Gibson.

“I couldn’t ask for much more at the moment – it’s all going very well. We happen to have very good pace; the car is very good at the moment so we are happy as – a good effort from the whole team.”

Suzuki New Zealand motorsport manager Darren Stevens said it was a great start to the season after a tense qualifying.

“It’s so hard to pick who might be the form driver for the weekend and we were hoping qualifying might give us some clues. It looked like AJ Lauder might be hard to beat, but to be fair it was far more exciting to see the top seven times separated by seven tenths of a second – that’s like the blink of an eye, literally.”

“The wet start was a tough induction for our rookies but they took it all in their stride. And a big congratulations to Mark Gibson for making good on his qualifying effort. But also, huge credit to their mum Rachael, who has worked very hard to make sure the two brothers Mark and Rob get looked after so they can just concentrate on racing.”

“It was also a fantastic start for the championship season that every car finished – unscathed,” continued Burborough.
“Often in the opening race there is a hard-luck story. So we’re really pleased everyone can have an early night and concentrate on the two races tomorrow.”

Sunday’s first race starts at 10:03am with the 10-lap race being a full reverse-grid event based on the finishing order from this afternoon’s result. The third and final race covers 12 laps of the 2.82km circuit, with on-track promotion making way for the scheduled 1:48pm start time.

The results will determine the round winner and early championship leader, with the top three placers acknowledged at a track-side award ceremony at around 3pm.