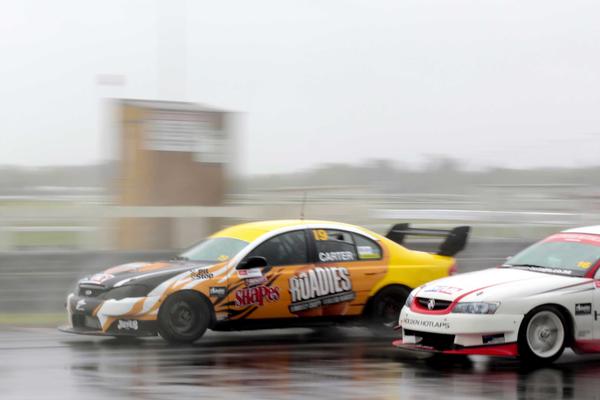 Auckland's Dwayne Carter in the Shapes Roadies Team Ford Falcon has bounced back from a hard start for his first round of the 2011/2012 BNT V8s championship by finishing all three races held at Pukekohe in the weekend CREDIT: Martin Rotteveel

Carter, who is contesting the BNT V8s class in the Shapes Roadies emblazoned Ford Falcon, had the toughest start to his championship campaign, when he left the track and smashed in the Armco fencing at high-speed during early practise yesterday. Lucky to have a spare car, the team performed miracles to get the 33-year-old driver back in time for the all-important pre race qualifying.

Sunday’s first race was a case of finishing for Carter, one of a few who managed to survive the treacherous conditions.

“Saturday wasn’t a very good start for us, but the boys did very well to get the spare and older car going. The goal was to get points and finish each race. We weren’t going to win races in an older car that hadn’t been driven for a while,” said Carter of his 16th, 12th and eighth race placing’s.

“We were happy with the last race, finishing eighth, which was very good given the conditions. So it’s a very good start for the team and our championship season. We can keep moving forward and climbing our way up the championship ladder from here.”

Contesting the Suzuki Swift Sport Cup in the smaller 1600cc car, Gaskin said his weekend showed good promise, despite the changing conditions. Getting a dry race on the Saturday, Sunday’s two left the 16-year-old student battling intense water spray as well as the other cars.

“Obviously it was challenging. It was a tough start to life for the Shapes Roadies Team, for both Dwayne and I. We showed some good speed at times and have got plenty to work with and look forward to for the next round,” said Gaskin.

Results for Gaskin include a sixth, a third, and eighth in the final.

The first of six rounds on the championship calendar, the team have plenty of time to put the cars back to showroom condition before they journey south for the second round for the season. Being held at Ruapuna near Christchurch, the Shapes Roadies Team will again contest a three-race programme, starting on Saturday 10 December.