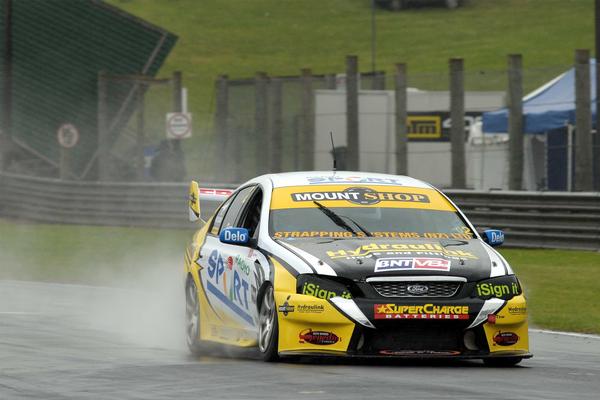 Birkenhead's Angus Fogg in the #2 Radio Sport Ford Falcon has taken an early lead in the BNT V8s championship despite a near disastrous crash early in the day the three-race 2011/2012 season opening round held at Pukekohe CREDIT: Lance Hastie

Birkenhead’s Angus Fogg has taken an early but narrow lead in the BNT V8s series after three difficult races at the 2011/2012 season opening round at Pukekohe over the weekend.

Starting the six-round championship with the new-look Radio Sport Falcon, Fogg has made the perfect start to his goal of winning the coveted V8s title, even when adversity challenged his team’s motives.

Three second placings in the Sunday 6 November racing was enough for the 44-year-old to take the weekend accolades.

Qualifying third fastest around the 2.82km track on the Saturday afternoon, Fogg was hopeful that Sunday’s three races would turn his fortunes. The opening 12-lap race offered a glimmer of hope with a second place in fine weather conditions. Starting mid-pack for the second 12-lap top-ten reverse grid race, Fogg wrestled his way through the field despite the rain. Late in the race the #2 Radio Sport Falcon then broke traction to hit the track Armco heavily. Surrounded by competitors also following suit, the race was halted, with calculated results putting Fogg in second place.

Starting from the front row for the third and final race for the day, Fogg made a strong start to get an early lead. With 22 laps to complete including a compulsory pit stop, continuing rain made conditions even more treacherous. Fighting to regain the lead Fogg had to settle for his third second placing, benefiting from consistency to take the round win.

“It’s what we come here for – to win. Obviously we had a few hiccups along the way, but full credit to the team. It was an awesome job because the car was badly damaged in that second race,” said Fogg.

“It was a big whack; a couple of guys up and down pitlane have helped us out big time and now the car goes back to Moselle Panel and Paint to pull it straight properly and replace a few panels. Mechanically it’s in good condition, but after a crash like that it goes on and on the things you find that are damaged so it will be a big couple of weeks before the next round at Ruapuna.”

With time until the second round, Angus Fogg and his Radio Sport team will head to Christchurch for the series second round over the weekend 10-11 December 2011.