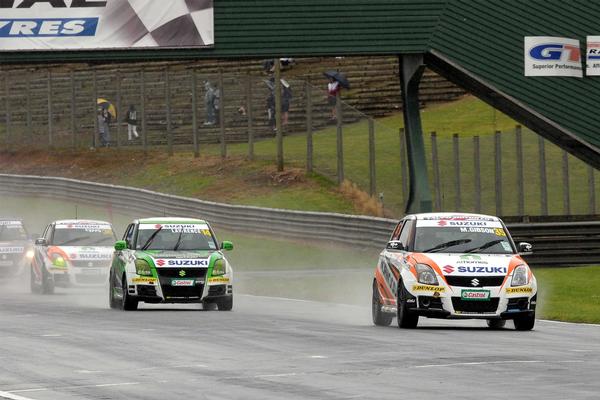 Winning all three Suzuki Swift Sport Cup races at the season’s opening round of the 2011/2012 season at Pukekohe has given Taupo’s Mark Gibson a strong and early lead in the six-round series.

“I couldn’t really ask for more from an opening round and have to thank the sponsors some more to be honest, it doesn’t happen without them,” said Gibson as he shared the accolades with his Taupo based three-car team.

“Hamish (Cross, his car engineer) has the car going really well. We had it good last year in the rain and we’ve done it again, this time here at Pukekohe. I’ve always liked the rain, I guess from my motorcross days, where it was always slippery.

“Now I’m feeling pretty confident going to the Ruapuna track – I really liked it there last year. The team has done a great job.”

Following on from a comfortable win in Saturday’s season opening race, Gibson weaved his way to the chequered flag in the morning reverse grid start race, before making it three wins in a very wet 12-lap final around the 2.82km circuit.

Castrol Scholarship winner Kent Yarrell provided the best result of the rookies; in the challenging conditions he finished the wet finale in fourth position.

“These guys are unreal,” described the Nelson bred driver. “Any mistake you make, three cars go by. So I was pretty happy to go from ninth to fourth in that race. I was hoping for a top-five finish for the weekend, but a few things didn’t go my way, so fourth in the final race was a great result.”

Series co-ordinator Paul Burborough said the drivers’ all needed a pat on the back for their competitive yet sensible attitude.

“It’s so easy to let emotions run away with you and forsake everything for a placing. It’s a real credit to all 13 of them they all finished every race. Especially in the two wet races we’ve had this weekend, the changing conditions make it so much harder to be competitive and yet the racing was as close as ever.”

Suzuki New Zealand’s motorsport manager Darren Stevens echoed his colleague’s comments: “It’s the best start. We were lucky there weren’t any safety car periods or stoppages. The racing was hard, there was rubbing yet no-one came unstuck or suffered serious damage. While it was a great result for Mark Gibson it was also a great result for every driver – we can head to the next round with a fully stocked spares truck.

“Hopefully by then summer will be with us and we’ll get a fine weekend in Christchurch,” he added.

The series second round heads south mid-December to the Ruapuna, where the teams will contest another three-race weekend from 10-11 December 2011.