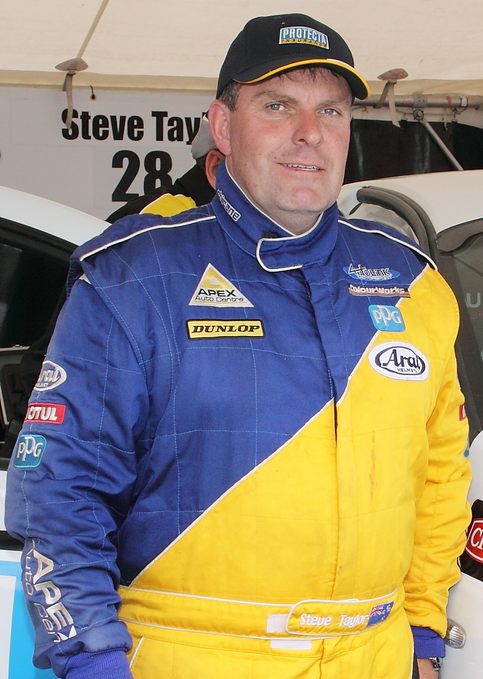 Steve Taylor claims a podium and fifth place in the standings in his debut for Protecta Insurance Racing in the UDC V8 Ute Championsihp. CREDIT: Little Devil Motorsport

Taylor Impresses with Podium and Top 5 on Debut

New driver to the series Steve Taylor shook up the UDC V8 Ute Championship at the weekend by placing third in the opening race of the season in his Protecta Insurance Racing Ford Ute at Pukekohe Park Raceway.

Previously a championship winner in the production class driving a substantially more nimble Honda Civic the Hamilton driver took to the high-powered yet weighty formula like a veteran hammer-head mixing it up with the ready-to-rumble V8 ute regulars.

"It's a bit different and everything needs to be done at about half speed compared to what I'm used to. The car stops and handles well but are very heavy, if they were lighter they would be quite a deadly weapon." said Taylor.

Coming away from the first round in fifth place overall Taylor sits behind championship favourites Andrew Waite (Ford) and Chris Hanley (Holden) who are then followed by seasoned old boys Geoff Spencer and Peter Ward in third and fourth.

"I think we opened some eyes at the weekend and it's not all about the young ones being near the front." said Taylor.

Taylor followed up his impressive podium with a 10th place in the reverse start grid race then sixth in the third and final race of the weekend awarding him with an excellent debut result of fifth overall.

Dramas unfolded when in the final run of the weekend the racing had to be cut short when another driver collided heavily with the armco and the damage was so severe that the race was red flagged in order to repair it to a safe standard.

With Pukekohe being mostly a point-and-squirt circuit Taylor did feel the Holden utes held an advantage over the Fords this time around.

"I think the aero is a bit better on the Holdens for this track and they seem to cut through the air more than the Fords. They are coming off Railway better and getting more speed down the straight." said Taylor.

In past seasons the Fords appear to have performed better on the tighter circuits against the Holdens and both models are power regulated to maintain parity.

The weekend for Taylor was not without dramas and he was happy to keep a cool head and bring the Ford back home unscathed even when close calls and strong challenges came his way.

"There was one point there when one of the other drivers pushed me out and stuck me onto the grass but I didn't want to bring the car home looking like some of the others at the weekend so I let him go." he said.

The next round of the UDC V8 Ute Championship is at Powerbuilt International Raceway, Ruapuna in Christchurch over the weekend of 9-11th December.