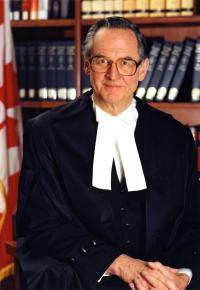 Mr Bain’s lawyers notified the Minister last year of his intention to claim compensation but have been seeking legal aid since. He is now proceeding without it.

“Due to the long-running and high-profile nature of the case, and after consultation with Mr Bain’s lawyers, it was decided a judge from outside New Zealand would be appointed,” Mr Power said.

Justice Ian Binnie has had a distinguished career and was chosen from a list of several senior judges. He was appointed a Queen’s Counsel (Ontario) in 1979 and served as the Canadian Associate Deputy Minister of Justice from 1982 to 1986. He has served on the Supreme Court of Canada for more than 13 years.

Mr Power noted that Canada has a compensation regime with similarities to New Zealand’s.

“Justice Binnie’s appointment is a significant step in attempting to resolve Mr Bain’s claim for compensation and a step towards achieving finality in this case.”

Mr Bain was convicted in 1995 of murdering five members of his family in Dunedin. In 2007 the Privy Council quashed his convictions on the grounds of a substantial miscarriage of justice and ordered a retrial. In June 2009 a jury found him not guilty. He had spent almost 13 years in prison.

Mr Bain’s lawyers wrote to Mr Power in March last year notifying him of a claim for compensation. Mr Power instructed officials to work with Mr Bain’s lawyers to devise a workable process for the assessment of his claim. However, this engagement was limited while Mr Bain focused on seeking legal aid. At the end of August this year, Mr Bain advised that he wanted to proceed with his claim without legal aid, allowing for decisions to be made about the appropriate process for assessing his claim.

Mr Power said Mr Bain’s claim for compensation falls outside existing Cabinet guidelines because he was acquitted following a retrial.

“However, there’s still a residual discretion to consider claims outside the guidelines in ‘extraordinary circumstances’ where it is in the interests of justice to do so, and Justice Binnie will assess Mr Bain’s claim under this residual discretion.

“The compensation framework requires claimants to prove their innocence, and at a minimum, under Cabinet guidelines, Mr Bain will need to establish his innocence on the balance of probabilities.

“But because his case falls outside the guidelines, something more is required that demonstrates that the circumstances are extraordinary, and Justice Binnie will decide the best process for assessing Mr Bain’s claim against this test.”

Mr Power said Justice Binnie is beginning work on the case before the end of the year.