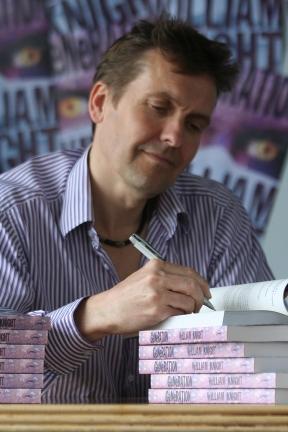 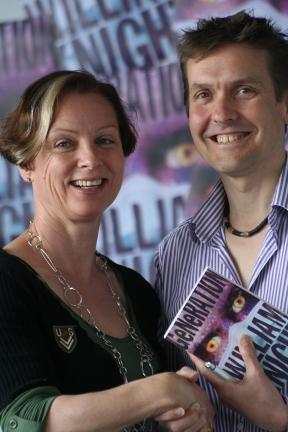 Standing on a soap box, waving his arms and pitting the crowd against themselves, Ferguson not only kept the bids rolling in, but entertained as well.

“You can’t do these things by halves,” said Ferguson, “you have to put your soul into it.”

The three lots contained the first three books off the press, of a limited run produced especially for the launch. As well as the books, the audience were bidding for a promotional poster, excluded and
deleted scenes from the book, and the book in digital format -- all personally dedicated by the Author.

“I can’t believe the auction raised so much,” said Knight. “I’m completely thrilled. And very happy that my writing can help out, even in a small way.”

Knight http://www.williamknight.info is a British-born journalist and technologist currently living and working in Wellington, New Zealand. In 2003 he published his first feature in Computing magazine and has since written about the many successes and failings of high-tech for the Guardian, Financial Times and BBC Focus among many other publications. Generation, an ‘intelligent horror’, is his debut novel
and is available as an ebook from Amazon, http://www.amazon.com/dp/B005YHZ9ZU.

Despite the foul Wellington weather, over a hundred and twenty adults and thirty children turned up at the Wellington Skyline function centre to meet the author and support the auctioneer.

Paula Shelton, manager at the Wellington Skyline, said she was delighted at the turn out on such a dismal evening. “It’s perhaps appropriate to launch a horror book on a foul night, and it’s fabulous to have so many here,” she explained.

The prize lot, book number one off the press, went to IT consultant Mike Lowery. “I love books and own over a thousand,” he said. “I’ve got a prize book from 16th century, but I’ve never owned a first edition, let alone the very first book printed.”