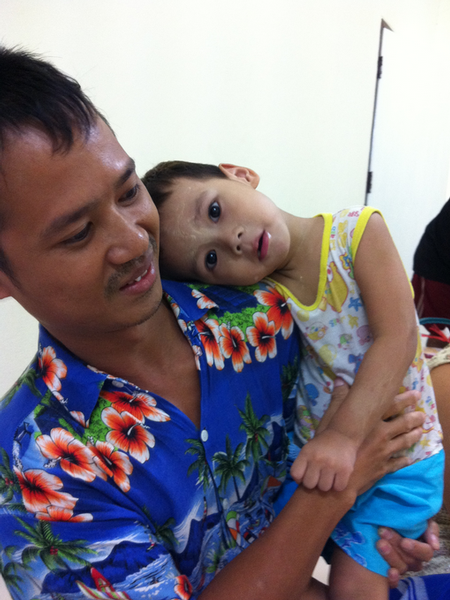 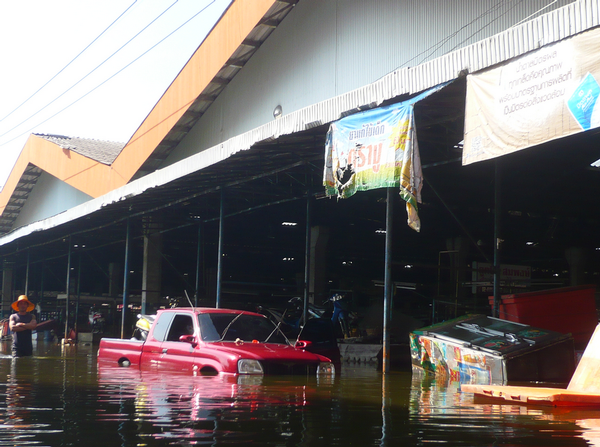 Rangsit was once a bustling 300,000-strong industrial district just north of Bangkok housing dozens of car, electronics and textile factories, which are now closed. As our tiny boat inched its way along the flooded streets, we saw convenient stores with broken windows and empty shelves and deserted market places, past endless rows of empty houses.

We were carrying Save the Children emergency food baskets and hygiene kits – which had soaps, shampoo, sanitary napkins and towels – but the boat had no engines so volunteers had to push us along with water up to their waists. The stench was unbearable and some areas smelled of rancid food and decomposing rubbish while others stank of leaking sewers.

The filthy water did not prevent children from playing everywhere, splashing and swimming in the floodwater. It took twenty minutes to cover just a couple hundred metres up to a small house where a migrant family from Myanmar lived.

One father, who refused to be named, was extremely worried about his son (30-month-old, Wei Oo Koo). The young boy had been suffering from diarrhoea ever since he went into the water. “He was playing in the floodwaters one morning and that same evening he started suffering diarrhoea. He is in a lot of pain,” the father explained.

He added that he does not know where to look for a doctor to help treat his son. In the meantime, he is using rehydration salts and other traditional Thai remedies supposed to help with abdominal pain, indigestion and diarrhoea. However, they have been of little help, and he is worried that he will need something else. “I don’t know what to do. I will need to find a hospital for my son soon if he doesn’t get better. If not, I fear the worst.” he said.

Many people living in Rangsit were evacuated in the floods, and some migrant families have returned to Myanmar and other neighbouring countries. They are fleeing the worst floods Thailand has faced in half a century, affecting more than a fifth of the country’s 64 million population since July and leaving more than 600 people dead, with 17 out of 77 provinces still under water.

Food prices have also risen sharply. A dozen eggs for example used to cost 30-35 baht (US$1) before the floods, but have doubled since then. Most of the several hundred factories in four industrial estates have been damaged and shut in this province alone, so with little work available and dwindling savings, those who have remained behind have little hope for the future.

To make matters worse, many public services have been affected as health workers and teachers cannot go to work. Schools, hospitals and clinics remain closed in many areas, according to authorities, putting 1.3 million children at risk of diseases such as severe diarrhoea and skin infections due to the stagnant water, and unclean water supplies for cooking and drinking.

For many children and their families, the situation in Thailand remains extremely serious, with thousands of children at risk from waterborne diseases due to stagnant floodwaters.