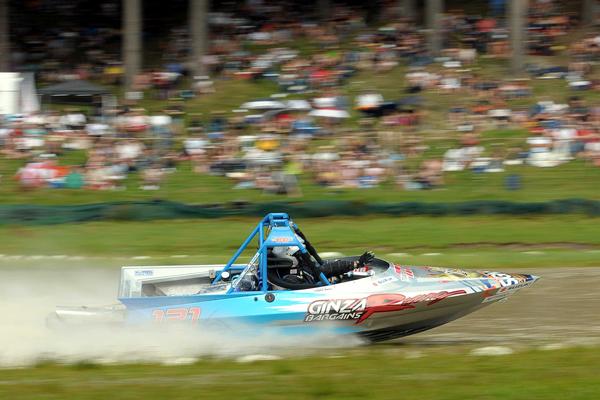 Quad-rotor powered jet sprint boat of Wanganui's Peter Huijs is among those entered to contest this weekend's opening round of the 2012 Jetpro Jetsprint Championship being held at Meremere CREDIT: Ian Thornton 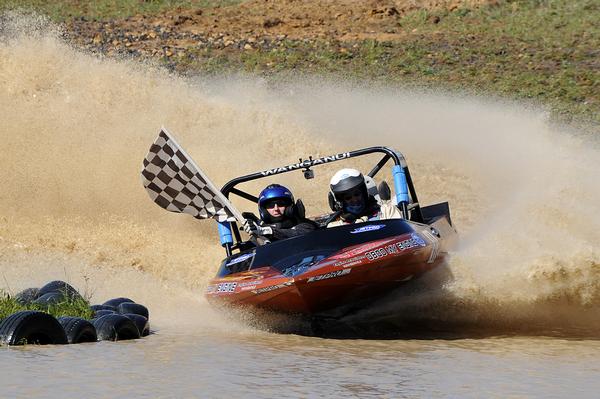 Wanganui's Bevan Linklater is among the category champions seeking to mount a title defence starting at this weekend's opening round of the 2012 Jetpro Jetsprint Championship season being held at Meremere CREDIT: Ian Thornton

The first of six rounds for the 2012 Jetpro Jetsprint championship title kicks off this weekend on Sunday 4 December at the Meremere Sprint Bowl (behind the drag racing track).

Renowned for its ‘slippery’ water, the silty clay Meremere aqua track will be a tough introduction for a number of debutants to the high-action impact water jet propelled series. With an increase in competitors for the season, each of the three competition classes starts afresh with the first boat touching the water just after 9am.

Competing against the clock in elimination heats, performance, reliability and experience are critical factors for the teams’ – as much as memorising the predetermined course.

Heading the Suzuki Superboat field where average engine power exceeds 1200hp, defending champions Leighton and Kellie Minnell from Wanganui have a simple goal for their 2012 title campaign. Returning to the country a day before they take to the water, Minnell says their competitive streak will overpower the effects of jetlag.

“Meremere is a fast track. We’ve had good success there in past years and we know this year we are going to have to raise the bar again – like the other teams’ will have too. The hardest thing for me will be getting off the plane and having 24 hours before I’m racing,” says the Wanganui businessman.

“Biggest ambition this year is to defend the title and have a crack at the world title too. Obviously we’re pretty committed having made the purchase of Peter Caughey’s (World Series title winning) boat. I’m relying on the team to have everything sorted, so am really excited.

“The hype is fantastic. Everyone I’ve talked to has raised the bar from last year – they have gone all out. I think the sport itself is on a rise.”

Taupo’s Reg and Julie Smith return to the White Pointer Boats international specification Group A field with similar aspirations, despite the for sale sign hanging from the boat and new role as Jet Sprint Association president.

“Originally I wasn’t going to race this year; the boat is for sale as a going package but I felt an obligation to defend the title. It falls a bit flat if you’re not there to carry it on. As I have to be at all the events so I may as well be competing and because the World series is coming up, and there isn’t one I’ve missed yet, I feel I’d like to do that as my swansong.

“So this year is it. I’ve said it before, but I’m sure this time. To go out as double New Zealand champion would be pretty awesome, however there are at least eight guys who will be every little bit as competitive. It’s going to be a pretty tough trophy to win as everyone’s after it.”

With the two-round UIM World title series mid the domestic season, Smith, title runner-up in 2009, says knowing your limits is key to consistent point scoring: “My game plan is to go better; I’ve done a bit to the boat, freshened the engine, done a few bits and pieces to the jet unit and I believe that’s where some advantages are. It’s just keeping it keeping clean, tight and out of trouble will be the way to go.”

Entry level Jetpro Lites defending champion Bevan Linklater from Wanganui says the affordability of the class allows him to compete and still look after his young family. Frequently setting times inside those claimed by more powerful boats, the 31-year-old electrician says it’s a simple equation: “Drive it as hard as you can. That’s pretty much it; you’ve got machinery that’s not up to the same spec so you’ve just got to drive it hard.”

With an eye on claiming back-to-back titles and having fun, Linklater says Meremere has a good mixture of character to open the season with.

“It’s a good track; it’s got a mixture of some tight corners and some slower ones and around the big speed bowl it’s pretty flat out. You’ve got to make sure you’ve taken your brave pills.”

With four practise and qualifying runs in the morning for each category, the top-16 is cut to top-12, top-8, top-5 and top-3, to determine the round and podium placing’s.

Points are awarded respective to the finishing position for both the driver and navigator, with all rounds counting toward the overall title.

Located quarter of an hour south of the Bombay hills, the Meremere Sprint Bowl is located just behind the Fram Autolite dragway off State Highway one.