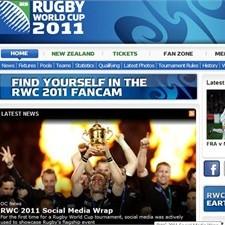 The tournament’s multi-platform digital strategy, including website, social media, App and digital daily highlights, proved a hit with fans all around the world and was voted the best event strategy for 2011 along with another Rugby property, the RBS 6 Nations.

Eighty sports properties were whittled down to a shortlist of 25 by Rachael Church-Sanders, author of the SportBusiness Digital Sports Review 2011 report, over four categories: Events, Teams/Clubs, Federations/Leagues, General.

The 25 properties were then judged by a panel of digital sports experts and scored according to their website, mobile and social media offerings in addition to general strategy.

Church-Sanders said: “Rugby World Cup 2011’s comprehensive digital strategy and delivery was given a big thumbs up by fans from around the globe, hungry to immerse themselves in tournament content across multiple platforms.”

The quickly evolving digital landscape was underlined by the fact that page impressions on the official mobile platforms outnumbered www.rugbyworldcup.com by a factor of three to one.

IRB Head of Communications Dominic Rumbles said: “This prestigious award is a great honour. The success of the Rugby World Cup 2011 digital offering is certainly a reflection of the collaborative vision and approach between the IRB as event owner, Rugby New Zealand 2011, IMG and Deltatre in delivering a comprehensive and free platform for fans to engage with the Tournament.”

“The digital offering was one of the success stories of an exceptional Rugby World Cup with the official App, Facebook, Twitter and innovative and insightful daily digital highlights programme giving fans unique interaction with the event and access to exclusive material.”