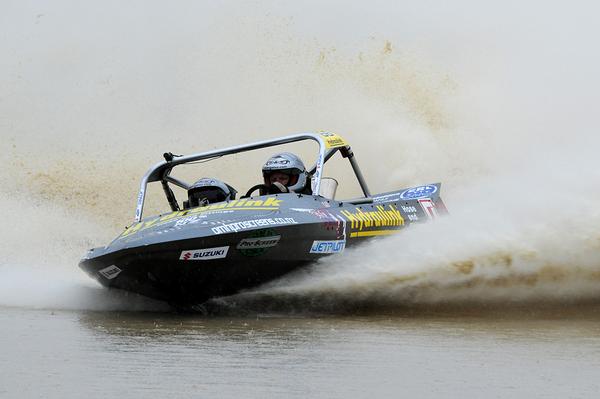 Best under pressure in the rain was Wanganui's Leighton and Kellie Minnell in today's opening round of the Jetpro Jetsprint championship held in wet conditions at Meremere CREDIT: Ian Thornton 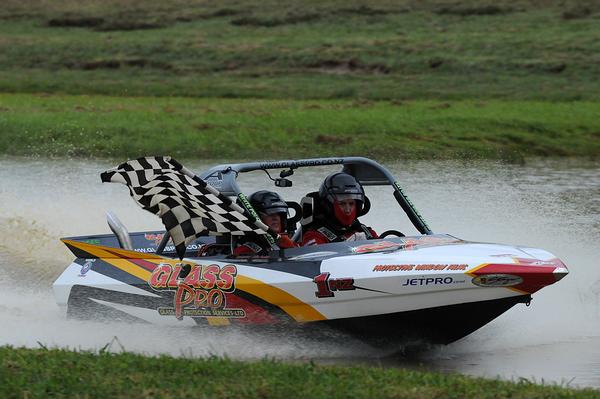 Taupo's Reg and Julie Smith shone in the wet against a determined field in the White Pointer Boats Group A field for today's opening round of the 2012 Jetpro Jetsprint championship held at Meremere CREDIT: Ian Thornton 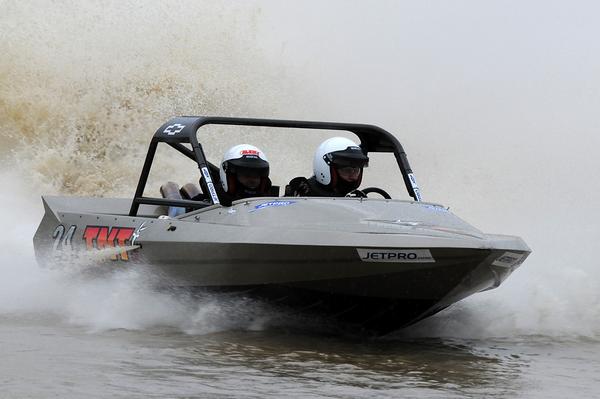 Whangamata's Ray Thompson has taken an early lead against strong competition in the Jetpro Lites category of today's opening round for the 2012 Jetpro Jetsprint championship title held at Meremere CREDIT: Ian Thornton

Even persistent rain couldn’t dampen the hot times set in all three of the competition classes for today’s opening round of the 2012 Jetpro Jetsprint championship held at Meremere (4 December), where fractions of a second separated the winning positions.

Topping the field for the first of six rounds toward the 2012 title, defending Suzuki Superboat champion Leighton and Kellie Minnell from Wanganui did it in style aboard a new boat. Jetlagged having just arrived in New Zealand from a motorcycle event near Madagascar, the husband and wife team said it was a dream start under the circumstances.

“It was really good to get one under our belts for the new sponsor Hydraulink. I think it’s important to defend the title with a win first up, so as the Hydraulink saying goes: we were best under pressure.

“The new boat’s a fantastic package. I was lucky enough to have Peter Caughey and his right-hand-man Dave there to help me tune it and get to know certain things that happen. It wasn’t a one-horse race, it was close, it was tight. So I’m really looking forward to the next round at our home track, there is going to be six to seven boats with a chippie paper between us.

“I think the calibre of the teams and new boats is going to make this season harder to pick than a broken nose.”

Stamping their ticket for a favourite’s pass, Taupo’s Reg and Julie Smith had the toughest task in the rain. Against the local might of Baden Gray and Bevin Muir, the Smith’s swept them all aside, by nearly half a second in the final run.

Wanganui’s Richard Murray and navigator Kesty Manning had their best result of a second overall, 0.4s behind the Smith’s. Hamilton’s Sam Newdick and navigator Josh Gattenby were a further 0.2s behind in the final run.

“It’s a bloody good start to the season,” said Smith. “It doesn’t get any better than that.

“There is a long way to go and the competition is so damn tight it’s going to be a tough season, everyone is so very close. I felt sorry for Baden Gray and Bevan Muir, they go well on their home track time wise but for some reason missed out at the end. But if it’s there and we can grab the win we will.

“We’ve done 13 races now and had 12 podiums – that’s a pretty good record I think, so obviously we’ve got to keep that momentum.”

Commenting on the unseasonably wet conditions after a picture perfect summer setup the day prior, Smith said no-one was using it as an excuse for on-track results: “Having talked with other drivers during the day they all had the same opinion, the rain wasn’t bothering them out on the track. That with a visor and a bit of Rainex it didn’t bother anyone, but hey, if you flicked that visor up she was stinging your face.”

The battle of experience helped Whangamata’s Ray Thompson wrest the previous Jetpro Lites class dominance of Wanganui’s Bevan Linklater. Setting fastest time for the day, Thompson was chased hard by Whangarei’s Denis Crene, who had to settle for second. Former Queensland Superbike champion Paul Gaston finished third in his first round of the New Zealand series.

Barely breaking for Christmas, the teams have three weeks until the series second round, being held on Tuesday 27 December at Wanganui’s Shelterview Raceway. The event dovetails with the Cemetery Circuit Boxing day bike race held around the streets of Wanganui.


Top-three run-off results: round one of the 2012 Jetpro Jetsprint Championship, Meremere 4 December 2011

NBNB: full results and points will be available from the www.jetpro.co.nz website.