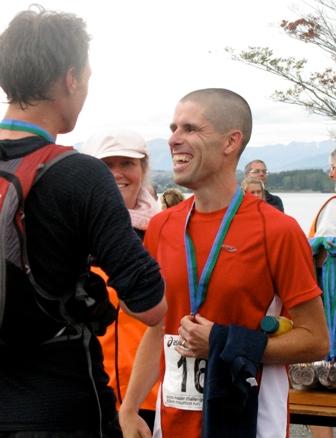 Thrilled to win the ASICS Kepler Challenge 2011 today for the second year was Vajin Armstrong, 31, of Christchurch, with a seven minute lead.

Looking amazingly fresh on the finishing line and happy to chat, Armstrong broke into the lead of the 60km mountain terrain race after the main hill climb to Luxmore Hut, running in perfect cool conditions compared with last year’s heat.

Armstrong, whose first name means swift, strong, spirited and heroic, was 2.03 minutes ahead of 2nd place holder Martin Lukes by Hanging Valley in the alpine section, despite Lukes being named King of the Mountain at Luxmore Hut for the second year running, keeping alive the tradition of recent years that if you are King of the Mountain, you don’t win.

Armstrong was in the lead coming up to Luxmore Hut, at a height of 1,085metres at the 13.5km marker, and didn’t hear Lukes coming up behind him. They sprinted together until Lukes shot past him onto a narrow board walk, with no way of Armstrong getting past.

Hoping for under five hours, Armstrong quickly went on to overtake Lukes and won at 5.01.54, beating his time last year of 5.03.27. The record is 4.37.41, set in 2005. Armstrong said: “I was motivated by thoughts of the enormous support I have from family and friends. I’ll definitely be back next year. Over the final 10k I felt relaxed and solid.”

Smiling broadly, Armstrong said: “Lukes saved me from the King of the Mountain curse so I’m grateful for that. I felt stronger this year.”

Armstrong has won the Kepler Challenge after a turbulent year in which his Christchurch world music business was destroyed by the earthquake and he suffered an ankle injury. Working in partnership with his wife, they are opening their business again just four days after this year’s Challenge.

Lukes , 40, also of Christchurch, and who has won the challenge three times, came in at 5.09.03, his fifth time in second place. Lukes said: “It’s a game of chess at times. My plan was to wind it up in the last 10k but there was just too much work to do from Rocky Point. We were running in marvellous conditions and it’s a fantastic event – the perfect mix of community spirit and corporate support.”

Armstrong added: “This is a great event. Whatever your standard and whatever your personal goal, you can achieve here.”

First woman in was Victoria Beck, 29, who came in at 5.51.28. The record is 5.23.34, set in 2003. A dentist from Dunedin, Beck suffered a few falls on the way and arrived with bloodied knees but smiling. Beck’s first time in the challenge, she is an experienced duathlon athlete, racing in bicycle and running events across Europe, as well as coming in 8th this year in the Hong Kong marathon.

Having just finished post graduate university exams, she was delighted to be first woman in. “Due to studies, I felt under-trained,” she said. “I was relying on having a base level of fitness and didn’t know what to expect, and was aiming for under six hours.”

Last year’s first female Shireen Crumpton, who was suffering from an ankle condition before the race, sadly had to retire mid-race. She withdrew at Rocky Point.

Doyle thanked the runners coming up the hill for keeping him informed about McAlister’s position. “I’m stuffed now but everyone was so encouraging and I got a second wind at the top – there are awesome views up there. It was a great atmosphere and now I’m off for icecream,” said Doyle.

Doyle’s girlfriend was doing the Kepler Challenge. Doyle said: “She’s tougher than me.”

Doyle, who has competed in the world mountain running championships, said the Grunt was the perfect length for him and that he was aided by a year’s consistent training.

McAlister said: “I’ve never run on such a big hill before and I am utterly thrilled to be second. My goal is to be in the Olympics triathlon.”

The first female in was Jess Simpson of Wanaka, in at 2:18:39 who was new to mountain running. She said: “It’s such a magical environment and the secret is to enjoy it – I just love running outside. The bush is incredible – unlike anywhere else I’ve ever run.”

Second female was Claire Corbett of Australia, in at 2:29:16 and third was Beth Cardelli of Sydney.
Local Te Anau farmer, Hamish McClean, 32, doing the grunt for the first time, was delighted to come in 11th, said: “I ‘m built like a greyhound and I wondered if I could run like one.”

The secret to winning the Grunt is clearly muesli and fruit: the breakfast of choice of both Doyle and Simpson.

The Kepler Challenge is a great fun family day out on the finish line, and to make it an inclusive day, local pre-schoolers take part in the Raceday Ramble, giving the opportunity to run up to the Kepler Challenge finish line to great applause. This year the winners were friends Jessica Molloy and Olivia Norris, who came joint first. After giving it a little thought the girls said they would both probably compete in the Kepler Challenge when they got older.