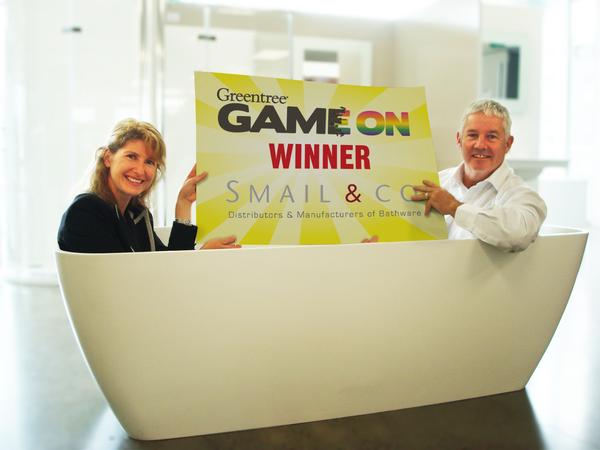 AND THE WINNER IS...

They make customised bathroom units in their Christchurch factory and compared their current business system to a long-drop dunny, in the era of the en-suite. This archetypal Kiwi family business has a 50-year history and is one of an increasingly rare breed of companies: a locally-based manufacturer.

“I just want to scream and yell – I can’t believe our good fortune!” said Annabel Smail, Director and Marketing Manager of Smail & Co, when we told her they’d won Greentree GAME ON.

Smail & Co both makes and imports bathroom furniture, and is facing a huge challenge: helping to rebuild homes and offices wrecked by Christchurch’s earthquakes. With their old system (archaic accounting, spreadsheets, and an erratic paper trail of orders) they’d have been hard pressed to cope with the expected flurry of work. But with Greentree handling their accounts, job costing, production planning and manufacturing, Annabel says, “I don’t think we’ll recognise ourselves!”

Smail & Co wants to break into the export market as well, and Greentree will help them realise that dream. “Our factory people will be over the moon,” says Annabel. “I also love the idea of our retailers being able to check their orders themselves, online. That will put us ahead of all the competition.”

The GAME ON judges were especially impressed by Annabel’s presentation, which affectionately took the mickey out of her father. She said that with a proper system, they could effectively put him out to pasture. “I loved the irreverent and anarchic view that Annabel had taken regarding her father,” says judge Mike Hutcheson. “It was a very mature and very funny approach. I loved the bare-faced cheek of it.”

Smail & Co’s prize will be implemented by Greentree partner Endeavour, whose Christchurch Director, Tim Ryley, said the win would be “an enormous transformation for Smail’s business”.

“They realise they have shortcomings, and they need to build a platform to support the growth that they will achieve both from having a system but also from the rebuild of Christchurch in particular,” Tim says. “I just think it’s a massive injection of capability for this business that they probably wouldn’t have been able to do on their own, so it sets them up for a fantastic few years coming, really.”

“Running GAME ON has been a joy because it gave us the opportunity to connect with real Kiwi businesses that are inspiring in what they’re trying to achieve,” says Greentree’s CEO, Peter Dickinson. “Smail & Co is a fantastic example of the mid-sized companies that are the heart of New Zealand business.”

It’s been a tough year for Smail & Co. Their creaky systems have made their job frustrating and arduous. “There is light at the end of the tunnel now,” says Annabel.