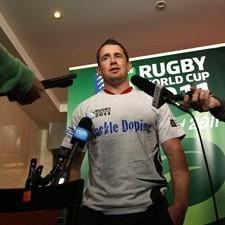 The World Anti-Doping Agency (WADA) has praised the International Rugby Board for its continued commitment in the fight against doping in sport as Rugby’s governing body announced details of a record testing and educational programme for Rugby World Cup 2011 in New Zealand.

Underscoring its commitment to lead in this important area of the Game and ensure a level playing field for all players, the IRB delivered an extensive programme of blood and urine testing In and Out of Competition across all teams, while exercising an anywhere, anytime policy.

A total of 216 urine and 76 blood samples were collected during the tournament, topping the 212 tests conducted in total at Rugby World Cup 2007 in France.

Even before a ball was kicked at New Zealand 2011 the 20 participating teams had undergone an extensive programme of Out of Competition testing that included urine and blood controls to screen for banned substances including EPO and Human Growth Hormone (hGH).

A Director General David Howman, who attended the IRB Anti-Doping Advisory Committee meeting in New Zealand, was impressed with the Tournament programme and the IRB’s proactive stance to drug awareness and education.

“Rugby is one of the sports that have been at the forefront of the fight against drugs in sport and the IRB and its Member Unions operate extensive testing programmes and should be commended," he said.

“The IRB has done extremely well setting up its own doping programme, which was recently reaffirmed as being compliant to the World Anti-Doping code.”

“Education is the key and I was delighted to see the IRB’s Keep Rugby Clean campaign which was run during the pool phase. It was great to see all the teams embracing the concept, supporting the programme, wearing the t-shirts and delivering a strong message around the world."

The inaugural Rugby World Cup Keep Rugby Clean Day was held on September 25 and was supported by all the teams, match officials, ball boys/girls and administrators by the wearing of branded t-shirts carrying the Keep Rugby Clean message.

“On behalf of the IRB I would like to thank everyone for their participation and showcasing the campaign to a television audience in over 200 countries. Moving forward, it is important that we continue to develop policies that ensure players have access to the best Anti-Doping educational framework.”

The player and his Union (who exited the Tournament after the pool phase) have been informed of the finding and the player is provisionally suspended until the outcome of a hearing, which is pending. Due to confidentiality provisions no further information can be released until the case is heard and a decision made.

Ricketts continued: "The IRB and its Member Unions operate a zero-tolerance policy towards doping in Rugby and this comprehensive testing programme administered across the 20 teams both before and during the Tournament underscores our collaborative commitment in this pivotal area of the Game.”

“The one adverse finding also demonstrates that education is key, even for painkillers, and we will continue to work in partnership with our Member Unions to ensure that players, coaches and medical staff have access to the best-possible educational resources and take greater responsibility for what they consume and administer.”

The results follow the news that IRB Keep Rugby Clean Ambassador and Argentina Rugby World Cup star Felipe Contepomi has been appointed to the WADA Athlete Committee, representing a further boost for a sport that has been at the forefront of the fight against drugs cheats in sport.

The IRB will publish the full 2011 Anti-Doping results in the New Year. For more information on the IRB's Anti-Doping programme go to www.keeprugbyclean.com.