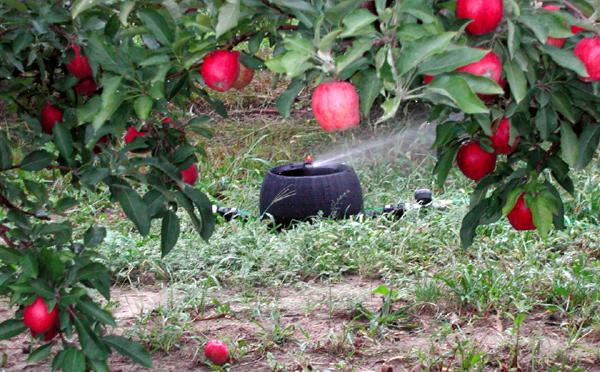 New Zealand orchardists now have a cost-effective, flexible and low technology option for protecting their crops against drought, thanks to RX Plastics’ innovative K-Line irrigation solution.

The changes to standard K-line include a pop-up sprinkler with a low angle 9⁰ trajectory, designed to ensure that crop foliage is not irrigated during normal irrigation, minimising disease and fungal growth during the growing season.

Gatehouse says the new solution is suitable for a wide range of tree crops from stonefruit and pipfruit through to avocadoes.

K-Line can now be run in pod irrigation lines of up to 12, which means that rows of up to 180m can be irrigated at one time. At an irrigation rate of 400 to 800 litres per hour, this is an excellent option for many orchard situations.

The patented K-Line Karousel technology allows the K-Line pods and K-Pipe to be turned by 90⁰, so a pair of Karousels at one end of two rows means the pod line can be dragged down around the Karousels and then down the next row to be irrigated. Depending on how far apart the rows are, 2 – 3 rows can be irrigated at one time.

The options for orchard K-Line include three sizes of K-Pipe: 32mm, 40mm and 45 mm, and four nozzle types for the pop-up sprinkler.

At full capacity, with pods 12m apart, a 180m x 12m strip can be covered at one time. Using the largest of the four nozzles will apply approximately 5.5mm of water per hour, and the recommendation is to leave the system in place for up to four hours in each location.

Gatehouse says the new solution is primarily aimed at orchards that don’t currently irrigate, but who are vulnerable to drought, such as those in Northland.

“Generally crops like avocadoes don’t require irrigation, but in recent seasons, the drought in areas like Northland has had a negative impact, just at a time when the growth potential is greatest,” he comments.

“The reality is that when the sun is shining, there is the biggest potential for a great crop – and not having adequate water is the most limiting factor.”

He says that inspiration for the new K-Line option came from visits to pecan orchards in the US, where there is demand for an irrigation system that can be completely removed at harvest time.

“Pecan growers use machinery to shake the trees at harvest time, which damages normal micro-irrigation sprinkler systems. So it became obvious there is a niche for K-Line in that market, but also for orchardists here in New Zealand, including growers of hazelnuts and almonds.”

Anyone wishing to recommend or install the new system can contact local agricultural merchants or RX Plastics directly.