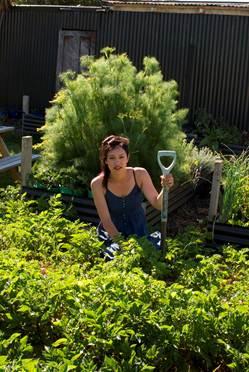 A young Ashburton mum who founded an initiative to help struggling families grow their own fruit and vege has been named as the supreme winner of NZ Gardener 2011 Gardener of the Year Awards, announced today.

Jade Temepara came up with the idea for the ‘Hand Over a Hundy’ three years ago. Tired of seeing young parents living nearby unable to cope with skyrocketing prices of fruit and veges, Jade decided to fundraise $1000 to provide ten families with a $100 worth of credit at a garden centre to buy the seeds, tools and seedlings they needed to establish their own garden. She knew these parents often lacked the skills and experience to grow their own food, so Jade linked the families with their own gardening mentor: a local experienced gardener who was happy to pass their knowledge on.

At the end of that year, the aim was that each family would sell $100 worth of produce from their backyard to fund the second year of the scheme. The first year 10 families took part, this year Jade has 13 involved – and dozens more are lining up for year three.

NZ Gardener editor Jo McCarroll says the annual competition, now in its fifth year, aims to recognise and reward the nation’s unsung green thumbed heroes, who generously share their gardening skills to improve the community in which they live.

“This year we had an amazing line up of finalists,” says Jo. “There are some extraordinary people out there doing inspiring things, but what Jade was doing always stood out for me. It’s such a simple, grassroots idea but one that’s bringing her community together – she told me what a kick the mentors get out of passing their skills on. She’s got four kids of her own and would have had every excuse not to make the effort! What she’s doing is changing people’s lives in quite a profound way.”

As the overall winner of NZ Gardener 2011 Gardener of the Year, run in association with Kiwicare, Jade wins $3000 to spend at her local Mitre 10, a year’s supply of Kiwicare Garden Products and a luxury weekend in Christchurch with tickets to the 2012 Ellerslie Flower Show.

This year the competition also featured school and community garden categories for the first time and taking out the prize for Best School Garden is a decile one school in the Far North. It’s an area with high unemployment, and Oturu School principal Fraser Smith felt the kids he taught didn’t often get a chance to see the rewards of entrepreneurial behaviour.

The pupils at Oturu don’t just grow fruit and veges, they sell them to fund the garden’s development. They also make and sell a range of food, like jam and olive oil, and herbal treatments and beauty products they’ve come up with and tested themselves, like lip balm and insect repellent. The herbal rinse they developed to use against headlice, which had been an ongoing problem at the school, was so effective it’s now being used by district nurses in the area.

Volunteers of the Kaiapoi Community Garden, an area devastated by the earthquakes over the last 16 months, have taken the title for Best Community Garden. Despite a number of obstacles – as well as the quakes the volunteers have battled snow storms and the challenge of fundraising in the disaster hit area – the group of locals have managed to turn an overgrown section beside the railway tracks covered in flax and weeds into a thriving and productive space.

“More than that, the garden’s co-ordinator told me that the garden’s been a lifeline for some of the people involved whose lives have been changed by the quakes in ways they might not have chosen,” says Jo. “Despite everything they’ve created this productive garden together. Kaiapoi Community Garden is a wonderful example of what people can achieve as a group even in the toughest times.”

Winners of the Best Community Garden and Best School Garden titles, both new categories to the NZ Gardener 2011 Gardener of the Year Awards, take away $1000 in Mitre 10 vouchers and $1000 worth of Kiwicare Garden products.

Read more about this year’s Gardener of the Year Award winners in the January issue of NZ Gardener, on sale 26 December.