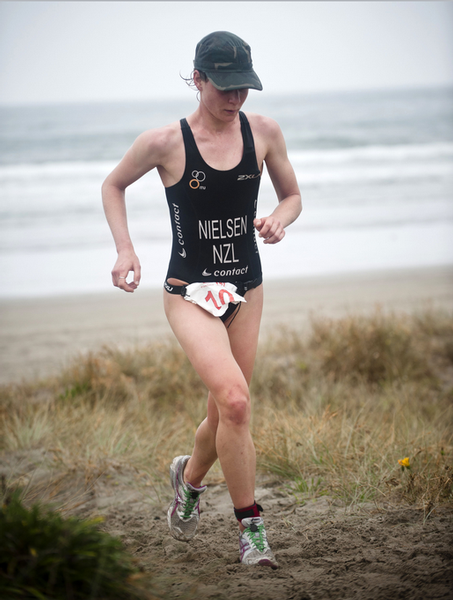 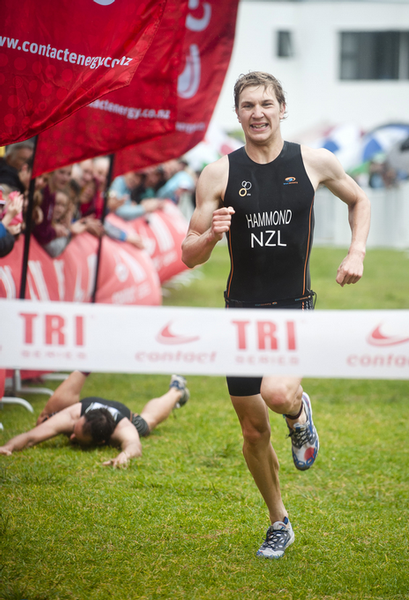 21 year old Hamish Hammond used the entire ‘race track’ in pipping 37 year old Stephen Sheldrake within 2 metres of the finish line to win the Contact Tri Series in wet and cool conditions in Whangamata today, with Sheldrake crashing to the ground just short of the line before dusting himself off to take second.

The stunning finish for the men was in contrast to the women’s race where 17 year old World Junior Champion Mikayla Nielsen (Waikato) dominated in her first start in a non drafting standard distance race to defeat another promising youngster in Maddy Brunton (Waikato).

Greytown based Hammond had to play catch up in the awful conditions as athletes bashed their way through choppy water conditions in the two lap 1500m swim and rode carefully on the 40km bike with roads slippery as the ‘big wet’ continued to hit the Coromandel Peninsula.

The 21 year old is one to watch for the future, a relative newcomer to the sport and a winner at the 2011 ITU Age Group World Championships, conditions though were nothing to the boy raised on the farm in the Wairarapa.

“I raced here last year and didn’t have the best race as I didn’t know the course really well but I ran well on the sand so knew I would go okay today. The conditions weren’t too bad really and didn’t bother me, I was a bit careful on some of the corners on the bike but it wasn’t too bad, I like the hard conditions and the hard racing.

“This is my first win in the Contact Tri Series and is a great way to start the year. I have really only been in triathlon two and a bit years so I am still new to the sport. I have worked hard in the holiday break, working hard outside while everyone else was snuggled up inside so I figured I would be in good shape.”

Former Contact Series champion Sheldrake is renowned as one of the sports best swim bike exponents and has spent the best part of two years struggling to overcome a serious knee injury that required surgery, it was that lack of running and further ‘niggles’ with the troublesome knee that opened the door for the younger Hammond.

“I think they need to introduce a new run distance, maybe 9.98km and I would be on top of the podium,” said Sheldrake. “This is old school triathlon, waves in the swim, rain on the bike and a cross country run so this was great, back where it all started here in Whangamata, I love coming here, pity about the weather but it isn’t cold. Hamish ran a great race though and was strong to the finish, congratulations to him.”

Nielsen meanwhile was dominant, leading almost from start to finish, taking control on the bike before running home comfortably ahead of Brunton who herself is in the middle of some big mileage.

“The swim was really rough; I was getting thrown about quite a lot, swallowing lots of water which gave me the stitch. The bike felt alright though, the legs are a bit sore but it was good. I enjoyed the longer distance though, I was quite relaxed on the run and enjoyed it.”

Nielsen was racing over the standard distance for the first time in a non-drafting race as she contemplates a few more events at this distance. The priority though is to go back to back in the World Championships in Auckland in October.

“This really was a training day for me albeit one that had the pressure of racing as well. The goal for me this year is to win the World Championships again, I am eligible again in the Junior (U19) category and it would be great to win in Auckland.”

Conditions were testing for all on the day, with competitors taking part in various race distances from the children’s Contact 1:2:1 to the beginners 3:9:3, the sprint event and on to the Contact Trophy race over the standard distance (1500m swim, 40km bike, 10km run).

Notables to take part on the day included multiple Ironman Champion Joanna Lawn who used the sprint event as a tune up for the Port of Tauranga Half Ironman this Saturday, Lawn came home second in the 750m swim, 20km bike and 5km run behind youngster Nicole van der Kaay.

In the men’s sprint it was a battle of the youngsters with Sam Ward running home strongly ahead of Tom McLaughlin and Tayler Reid.

Full results available at www.triseries.co.nz later in the day