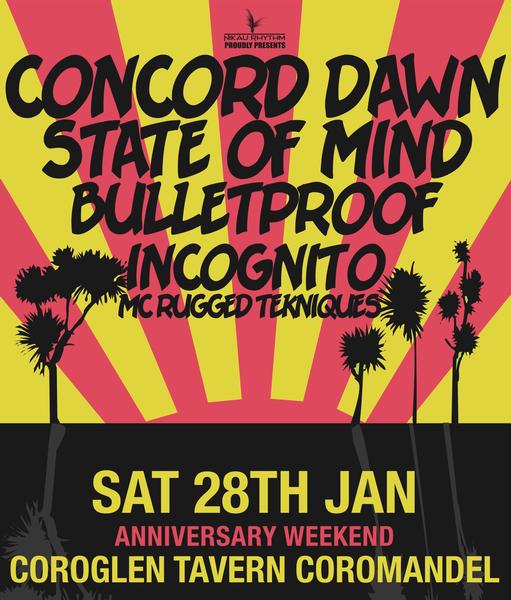 Nikau Rhythm have announced the line up for their fifth annual ‘Anniversary Weekend Show’ at the Coroglen Tavern in the Coromandel.

On January 28th 2012 be set to have your mind blown by the biggest Drum & Bass and Dubstep artists New Zealand has to offer.

Iconic D&B act Concord Dawn return from Europe to play the special fifth-year anniversary of what has become a must-attend event for dance music fans across New Zealand, heading to the beautiful Coromandel for a long weekend of great music.

After having a huge year in 2011, D&B duo State of Mind and Dubstep juggernaut Bulletproof will both bring their unique live set to the Coroglen Tavern. Incognito and MC Rugged Tekniques join them to round out this epic line-up.

It has been five years since all these acts have played alongside each other and they are ready to give punters one of the biggest dance shows of the year.

So get your crew ready and get your tickets quick because this show will sell out. Tickets are available from iTicket, Real Groovy Records, Funktion (Whitianga), Conch Records and from the venue. Camping and additional parking will also be available across the road from the Coroglen Tavern. You don’t want to miss this!