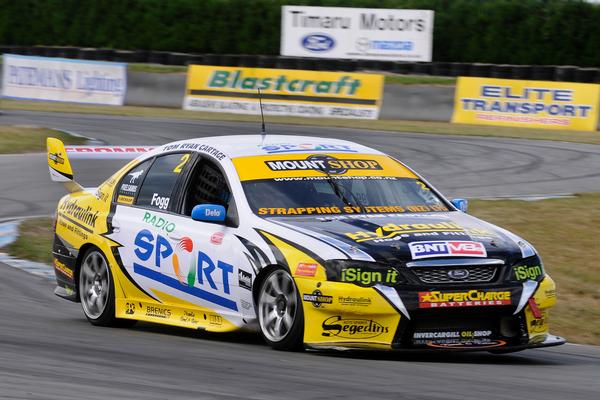 Birkenhead V8 race driver Angus Fogg achieved multiple goals at the BNT V8s series fourth round held near Timaru, winning two of the three races in the Radio Sport Ford Falcon, winning the round and bettering his previous lap record.

Relieved after surviving a chequered weather weekend at the Timaru International Motor Raceway, 44-year-old Fogg has also extended his lead in the six round series to 76 points over second placed Jason Bargwanna.

“We pretty much achieved it all didn’t we,” said Fogg after collecting an extensive collection of weekend trophies.

“Didn’t quite get the race two perfect but it was pretty close to being the perfect weekend with two wins and a second. The car in the last race was just unbelievable – like it was on rails. It was just so consistent it made everything look easy but it obviously wasn’t as there were 22 laps of hard sweat, guts and work behind the scenes. But it’s good to now have a lead that means we can now drop a race and still be in contention.

“With six races to go anything can happen and we’re just hoping we can pull it off with a title win.”

Setting fastest time in Saturday’s qualifying around the 2.4km circuit; Fogg then collected a further 75 championship points in the afternoon race after winning by a margin of 5.118 seconds.

The weekend’s second race, held early Sunday afternoon, followed heavy rain through the area, leaving the track ‘like ice’ in places. Starting from the rear of the field in the reverse-grid 12-lapper, Fogg cautiously lay in wait as he paused for passing opportunities. Taking the chequered flag in second place, the unscathed car left the team with minimal preparation for the afternoon finale.

From pole position for the 22-lap race, Fogg held the advantage through the tricky right-left essess off the start straight, streaking off in to the distance. Even with a compulsory pit-stop wheel-change during the race, Fogg’s team maintained his advantage, allowing him to press on and achieve a 22 second winning margin.

Fogg’s impressive results also made him the benefactor for the annually awarded Ernie Sprague Memorial Trophy for the highest placed Ford V8 for the weekend.

Following the back-to-back V8 race weekends, the team now return to Auckland in preparation for the series penultimate round mid-February at Manfeild in the Manawatu.