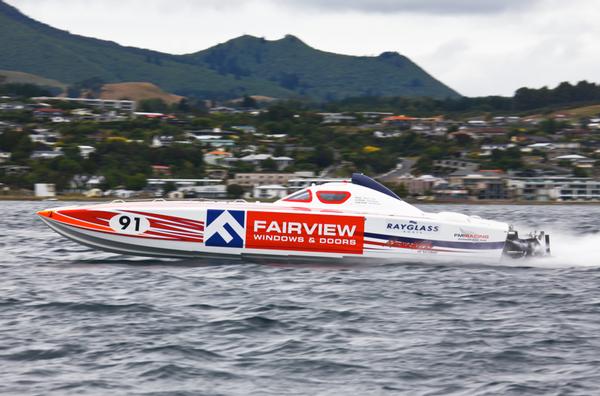 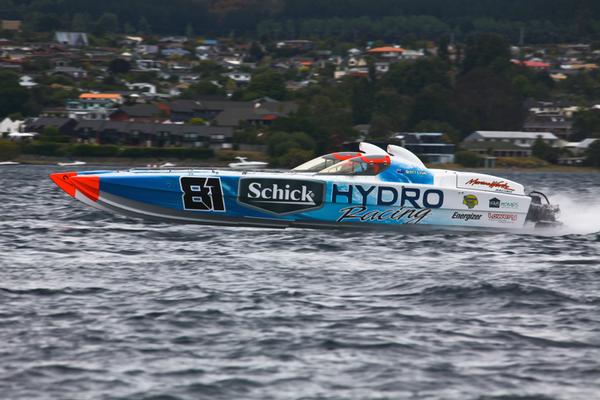 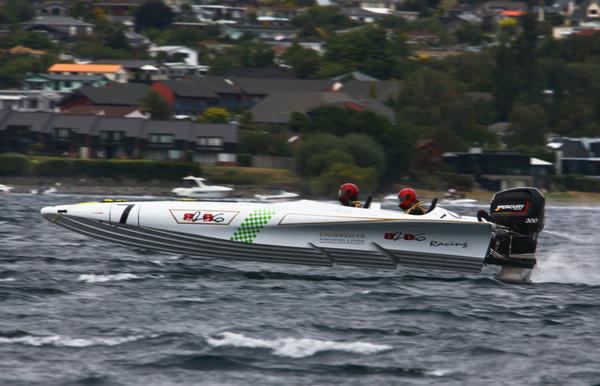 'Back2Bay6' driven by Glenn and Chris Powell win their first race in their new boat at Taupo in 2011. CREDIT: Cathy Vercoe LuvMyboat.com 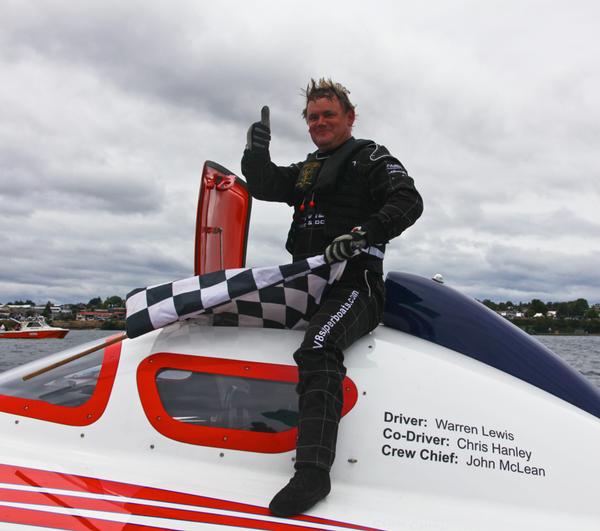 After a disappointing cancellation of the race at Tauranga due to debris washed into the harbour from the shipwrecked 'Rena', Taupo will host the first race in the NZ Offshore Powerboat 2012 season. Last years championship winning Superboat 'Fairview' sponsored by Fairview Aluminium Windows and Doors return this year to defend their title. Warren Lewis is back at the throttles with his new, but experienced driver Andrew "Flea" Koolen, who had a fantastic 2011 season, as the winning throttleman in the Superboat Lite Class. This year sees the return of 'Schick Hydro' driven by Scott Lewis and Murray Tuffin. Two other Superboats will compete some of the races this season, 'Doosan' the 2010 champion driven by Cary Gleeson and Sam Filmore and 'Fujitsu Better Heat' driven by Tony Coleman and Chris Hanley the 2009 Champions.

Powered by twin inboard Mercury 525 Hp engines, these magnificent beasts will be making some tight turns close to the shore, providing plenty of spray, sound and spectacle for the viewers along the waterfront.

Also competing over a 100 mile course are the Superboat Lites. This year sees the return of Gordon Robinson and Andrew MacBeth in 'Barracuda Kayaks', and Brook Faulkner and Tony Carson in 'Redsteel'. A new team will also take to the field this year with Mike Gerbic, former champion in the Super 60 class moving up to Superboat Lite with Alan Brand in 'Espresso Engineers'. Previously raced as 'NZ Blokes', this boat was the class championship winner in 2011.

This year sees a number of changes for the smaller boats as the Sonics that had previously run as part of a Honda Class including 'CRD', and 'Total Oil', have upgraded their engines, and will now run in the Sports 60 Restricted class alongside Jono Hanley in 'Energizer' and Mikey Knight in 'Auckland District Collections'. The Batboat 'Back2Bay6' driven by Glenn and Chris Powell will be back this season, no doubt keen to get a full season of races completed after missing several events in 2011 due to damage sustained in a collision. Mike Gerbic's championship winning Batboat 'Espresso Engineers' may also make an appearance this season driven by Mark Diggelman and Dave Vazey. Bob Smith, winner of the Superboat Lite class in 2011 has also made some changes and will race with his son this year in the Sports 60 class.

The first race of the season is always exciting with old rivals out on the water ready to try out their modifications to see if they have the right mix to lead and win the season. Rumours still abound about who is racing and what boat they will be competing in. Teams are able to confirm their entry up until the day before the season start so there are always a few surprises when the boats line up for the first race.

Racing on the lake starts at 12.00 on Sunday, and the event usually takes an hour to be completed. Two races are run at the same time with the Superboats and Superboat Lites completing a 100 mile race and the other classes completing a 60 mile race.

Boats will be on display on the reserve in front of Sun Court Motel from Friday afternoon.
Superboats and Superboat Lites will launch in the marina, while the smaller boats will use the public boat ramp.
Racing starts at 12.00pm
Best viewing from the Northcroft Reserve and Lake Terrace foreshore

Event details are posted on the NZOPA Website www.nzoffshore.co.nz
After the Taupo event racing continues at Gisborne on the 4th February, Beachlands on the 18th February, Napier on the 17th March, Whitianga on the 31st March, Wellington on the 14th April and the final race of the season in Auckland on the 28th April. A replacement date for the cancelled Tauranga race may be added to the season.