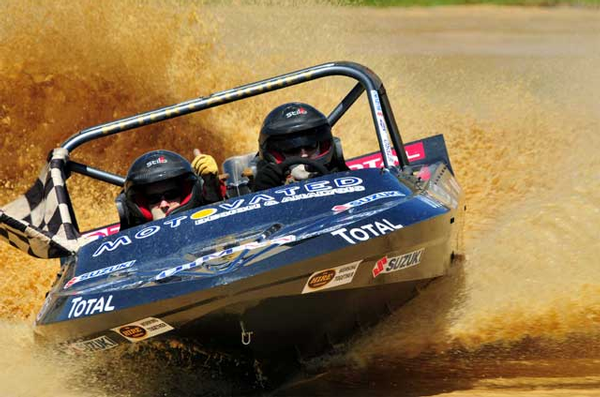 Canterbury's Peter Caughey and Karen Marshall will lead New Zealand's chances of securing the Superboat category of the jet sprint World Series which starts on 11 February in the Wairarapa. CREDIT: JetPro

Canterbury’s Peter Caughey has the weight of the world on his shoulders as he and jet sprint boat navigator Karen Marshall (Christchurch) prepare to defend their Superboat title at the two-round Union Internationale Motonautique (UIM) Wanganui.com World Series starting on 11 February in the Wairarapa.

The Woodend sprint boat fabricator has been busy preparing boats for clients since winning the back-to-back world title in Australia late in 2009 and says the 2012 season has arrived a little too quickly.

Having not competed since winning the last title, the pair will reunite in a brand new boat that will run for the first time at the opening round near Featherston. The title winner will be decided a week later with the final round held near the river city of Wanganui 18-19 February.

“Our intention was to have the boat complete and be racing it in December, so we are at a disadvantage. But we know we’ve got a good boat, good hull and the whole jet unit package is a couple evolution steps ahead. We’ve got some designs we’ve developed a bit further than we’ve run in the past,” says the 2008 and 2009 title winner.

Against four Australian teams, 11 Kiwi’s and Canadian based Cory Johnson all contesting the Superboat category; Caughey says the hot favourite at the moment is Wanganui’s Leighton and Kellie Minnell.

“There are just so many hot pick names in both Superboat and Group A – it has to be said. Looking down the list, Wanganui’s Leighton Minnell has to be hot property with the current New Zealand title and too Duncan Wilson, he is back and hauling. Dean Finch, from Australia and his twin-turbo package; he’s a bit of an old fox; he’ll sneak around and pull out a blinder when necessary. Plus Canadian Cory Johnson, who is a very capable racer and it’d be significant for him to contest the world champs here.”

Using mainly V8 engine powered boats coupled to water jet pumps, the growing spectator sport has moved from river courses to permanent multi-channel aquatracks. Each team has to navigate a pre-determined course as quickly as possible. Void of directional aids, the course is driven solely from memory.

“As a driver you get the rotation clear in your head after about the second qualifying round and then the focus is on stringing together the perfect lap,” adds Caughey. “Often you can develop a short focus and only concentrate on the corner in front of you rather than lifting your eyes a bit and think of the next three-four corners. So you can come out of a turn and be faced with a sudden decision on which channel to take next – that’s where a good navigator picks you up. Often it’s just that endorsement when a driver hesitates for whatever reason; the navigator shows them where they should be looking. So they are an integral part of the whole package and hugely valuable.”

Along with the 1500horsepower Superboats, there will be 13 teams competing in the International Group A category.
The biggest difference between the two is restriction on the engine’s cubic capacity. Current champions Slade and Vanessa Stanley from Australia will defend their title, sharing their 2009 winning boat with new owner Damian O’Leary. Title runners-up Reg and Julie Smith from Taupo are New Zealand’s highest ranked crew.

Teams’ get four qualifying runs to familiarise themselves with the course rotation, with the times feeding one-shot elimination runs starting with the top-12, that drops to eight, five and three to decide the round podium placings.

Awarded 30 points for a win, the sum of the two weekends will decide the winner in each category, with the overall title being presented at an awards dinner in Wanganui Sunday 19 February.

Spanning the Saturday and Sunday of each weekend, preliminary qualifying will be held on the Saturday with eliminations taking place on the Sunday.