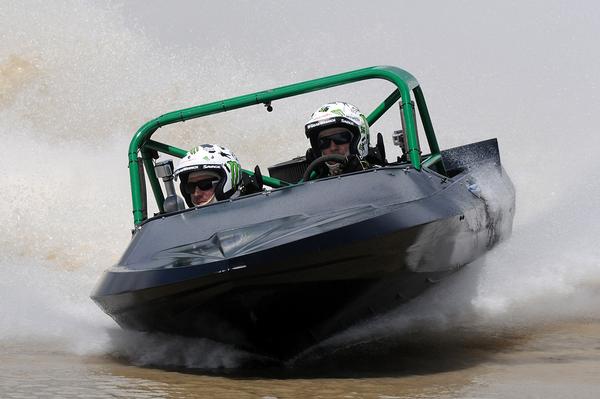 Melbourne's Nathan Pretty and navigator Josh Hunt are using a New Zealand owned and run boat to attempt lifting the Wanganui.com World Series jet sprint title back across the Tasman when the two-round series kicks off in the Wairarapa on 11 February. CREDIT: Ian Thornton

V8Supercar driver Nathan Pretty isn’t concerned the boat he will be using for the two-round Union Internationale Motonautique (UIM) Wanganui.com World Series is owned by a New Zealand team, when the series kicks off on 11 February in the Wairarapa.

Winner of the 2008 International Group A category title, Pretty committed to doing the 2012 series using the boat owned and campaigned by Levin’s Andrew Guthrie.
More at home in a V8Supercar, Pretty says his heart is in jet sprint boat racing and is intent on another title: “There is no secret to the fact I’m not coming over to make up the numbers. I will be very serious about the whole thing and try bring it back to Australia again.

“Plus I enjoy the comradery there (in New Zealand). Here in Australia it is still good, but there, when you’ve got a few days between rounds, the tracks, the quality of the water, the atmosphere and surrounds, you get in awe of the place. So I really enjoy coming over and racing even more when it’s held in New Zealand.”

Pretty and navigator Josh Hunt recently tested the boat he will be using at the Tauherinikau race course aquatrack north of Featherston on 22 January. The 38-year-old from Melbourne starts his title quest at the same venue on 11 February with the second and final event for the title held near Wanganui the following weekend (18-19 February).

The water jet propelled boat is powered by a 600 horsepower 406 Chev engine, one of 13 boats in the Group A category contesting the World Series.

Defending title champion Slade Stanley from Australia will be Pretty’s arch rival, along with runner-up Reg and Julie Smith from Taupo.

Teams’ get four qualifying runs to familiarise themselves with the course rotation, with the times feeding one-shot elimination runs starting with the top-12, that drops to eight, five and three to decide the round podium placings.

Awarded 30 points for a win, the sum of the two weekends will decide the winner in each category, with the overall title being presented at an awards dinner in Wanganui Sunday 19 February.

Spanning the Saturday and Sunday of each weekend, preliminary qualifying will be held on the Saturday with eliminations taking place on the Sunday.