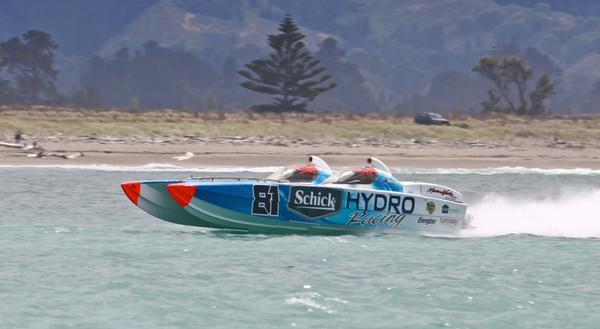 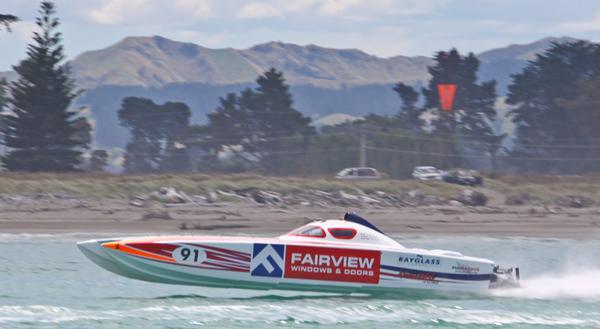 With only a week between the first two races of the 2012 New Zealand Offshore Powerboat championship there is not much time for crews to make any repairs or alterations before heading for Gisborne on New Zealand's east coast. This venue always provides plenty of excitement with big waves that build as the ocean pushes close to shore providing an unpredictable battleground for the best of New Zealand's Offshore Powerboats and their crews.

After race one at Taupo there is no doubt that Warren Lewis and Andrew "Flea" Koolen are a winning combination, and that Warren, once again has his eye on the Superboat Championship title for the season. The teams in 'Fujitsu Better Heat' and 'Schick Hydro' will be wanting to improve on their performance at Taupo, taking advantage perhaps of the bigger ocean swells to make their mark in what promises to be very different conditions from last week.

In the Superboat Lites Tony Carson and Brooke Faulkner of 'Red Steel' were in their element at Taupo, leading from the start in the rough conditions. Gisborne is their home territory, and we can expect another strong performance from this team this week, especially since they are perhaps even more familiar with the conditions expected on Saturday. Each week however, sees the three newer teams become more familiar with their boat and crew which should, in theory, result in a better performance. Theory however, is a fine thing, and doesn't always stack up against the conditions encountered on the day.

The Sports 60 Restricted class was hard fought last week and James Taylor of 'Total Oil' who led for most of the race only to be overtaken in the second to last lap will be itching to set another cracking pace and get across the line ahead of Mikey Smith in 'Konica Minolta'. Mikey Knight retired early at Taupo, so we can expect a concentrated effort from him in 'Auckland District Collections' to get a podium place. With his scheduled co-driver Nigel Smethurst unavailable, Mikey is joined this week by another experienced offshore racer, his father Matt Helm. He has a lot of work to do after his DNF in the first race, but the season is only just beginning.

The forecast this year is for 9 knots of breeze from the south east, which will be a welcome change after the strong winds encountered by the boats in Taupo, which saw many of them standing on their tails as they headed out toward the middle of the lake. What could make the race on Saturday really thrilling is the building ocean swell, which is forecast from the south. At this stage predicted to be just over a metre in height, the swell, when combined with the incoming tide and wind from the same direction will provide plenty of large waves rolling in to the bay. At present the wave height at the shoreline is expected to be about two metres so the stretch along the beach could be very exciting indeed.

Once again this year there will be a parade of the powerboats and their crews through the main street of Gisborne. The teams take great pride in the presentation of both their boats and tow vehicles and the city of Gisborne is always supportive with a large turnout of families, keen to get a close up look at the race machines. The parade starts at 10.00 am and boats are then on display near the Esplanade, where members of the public can walk around the boats and talk to the crews.

The race can be viewed from the Waikanae foreshore with excellent elevated viewing from Titirangi Domain. The race usually takes one hour and starts at 1.00pm.