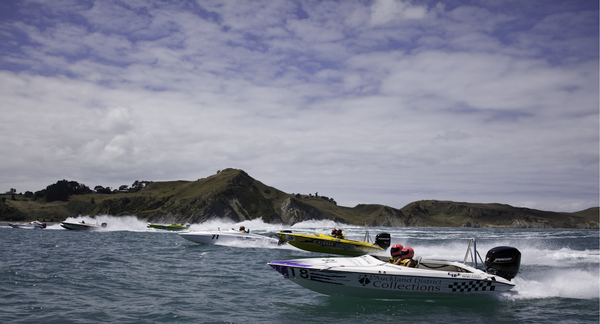 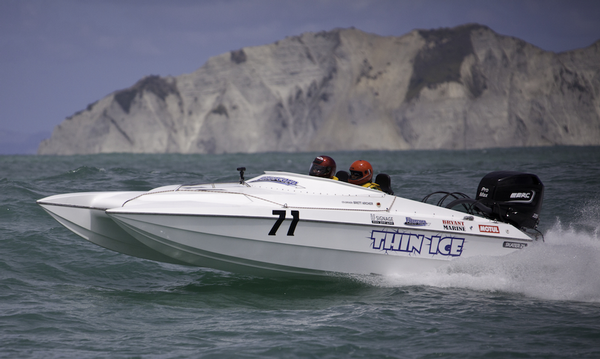 Gisborne once again turned on one of those hot, clear days with very little breeze but enough ocean swell to make the racing fast and interesting. The day started with a colourful parade through the main street of Gisborne, with the boats then on display beside the marina as teams finalized their last preparations and launched their boats.

It was obvious as the boats made their way out to the milling area that the incoming tide was going to provide plenty of air for the boats as they leapt out toward the starting point. Everyone had a lot to prove this week, the winners from Taupo needed to show that they deserved their last win and make theirmark on the field by winning two races in a row. The runners up from Taupo hoping to put the leaders in their place in the different but still challenging conditions, and make up for points lost in the first race of the season.

The smaller class of Sports 60 restricted boats was probably the most dramatic this week with seven starting and only five managing to finish. The lead changed hands six times throughout the race and no one could say that any of them were holding back.

CRD Automotive came off a wave and had a boat crunching landing on their side, splitting the hull along the chine, ripping the co drivers seat literally out of the floor, and flinging the crew into the water. The boat filled with water quickly and fortunately rescue boats were on hand to not only pick the crew up and check they were OK, but put a line on the bow of the boat which was all that remained bobbing above the water's surface.

Total Oil were leading for the first half of the race when they suddenly found themselves losing power. The engine cowling cover had come lose and worn through a hose, which split and sprayed salt water through the engine. While they managed to repair the hose and limp to the finish, they lost valuable time and their place at the front of the field.

Mike Knight, in 'Auckland District Collections' with plenty to prove appeared to have all his wishes come true as he made his way to the lead position. All set to win the race one can only imagine his horror on the boat running out of fuel short of the finish line! Mikey Knight racing with his father Mark Helms, himself a well known powerboat racer, who is solely responsible for his son catching the powerboat bug. Mark later said he had a blast and that his son had taught him a thing or two.

Mikey Smith was absent from 'Konica Minolta' this week, but the team was well represented when Jeff Weakes stepped up to the plate, great to see such an experienced hand at the wheel, proving he his worth by setting the pace at the start of the race. While not up to Mikey's usual crazy style the boat was still seen to make some magnificent leaps, and Jeff later admitted he thought they did well, especially since he was recovering from a broken hand!

Yeaa Naa appeared to stop at times struggling to get their boat going consistently in the conditions, like Taupo they concentrated on getting round and finishing the race to get the points.

Thin Ice were the true winners today. Finishing third at Taupo this team are having a fantastic start to the season, and appear to be a different team from their efforts in 2011. While the crew have a few years on some of the younger races they well and truly make up for it in experience and played a great game today, strategically placed to take advantage of other's catastrophes and earning a well deserved win. Brett Archer said after the race that they had been racing in the South Island and that the boat was now at the top of it's game.

With a roar the Superboats were off and 'Fairview', leaving nothing to chance charged ahead and stamped their place at the head of the pack, a place they refused to relinquish for the rest of the race, pulling further and further ahead of the other boats and, in fact, lapping several on their way to victory. 'Fujitsu Better Heat' driven by Tony Coleman and Chris Hanley raced hard, at one point almost catching Fairview who had to put in extra effort to keep their lead. 'Schick Hydo' appeared to struggle with trimming issues and while finishing successfully in third place were never really on the pace.

Tony Carson and Brooke Faulkner in 'Red Steel' were not about to leave Poverty Bay disappointed and, like 'Fairview', dominated their class, leading from start to finish. 'Espresso Engineers' looked to be well trimmed for the conditions but were off the pace required. Finishing in second place they will be happy with the points but no doubt already thinking about how to improve their speed. 'Alimax' too look to be improving every race, but again on this occasion, chased hard but were not able to pull back the leaders, finishing third.

Racing continues at Beachlands on the 18th February, Napier on the 17th March, Whitianga on the 31st March, Wellington on the 14th April and the final race of the season in Auckland on the 28th April. A replacement date for the cancelled Tauranga race may be added to the season.