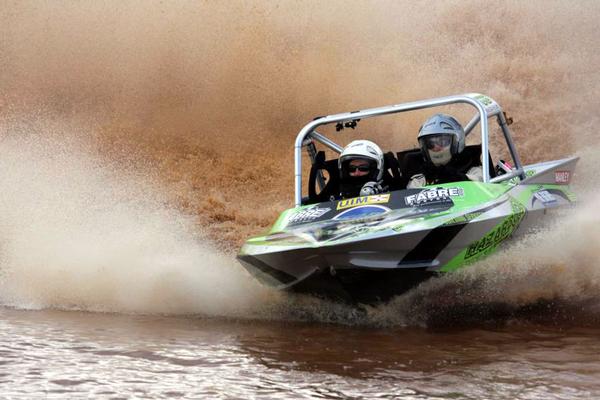 Defending Group A world jet sprint champion Slade Stanley from Australia rates his chances against competition from both sides of the Tasman as the two-round Wanganui.com World Series begins this weekend 11 February in the Wairarapa. CREDIT: JetPro

Defending UIM World Series Group A champion Slade Stanley from Australia reckons his toughest opposition for the two round 2012 title being held in New Zealand will come from his compatriot, but doesn’t rule out the Kiwi locals.

Starting in the Wairarapa on 11 February and concluding the following weekend near Wanganui, the two round Wanganui.com series has drawn a number of Australian teams to challenge more than just the Kiwi opposition in the water jet propelled boat series.

Winning the title in 2009, Stanley along with navigating wife Vanessa from Wagga Wagga, NSW, will defend their title after a late change in their plans meant they couldn’t compete in the higher specification unlimited Superboat category. Parts for a new engine to power the New Zealand built hull left them

“It’s not the title I was really wanting to chase after. I was wanting to step up to the unlimited (Superboat). But it wasn’t to be so will be doing our best to defend our title.”

Stanley says he last drove the boat when he won the title late in 2009, having since sold it to Damien O’Leary, who will also contest for the title.

“We’ve made a few little changes. I’ve put my old engine back in to the boat and we’ve changed all the seats over, so we’re hoping it’s all still relatively balanced and running well. All that aside it should still be the old boat and shouldn’t take long to adjust.

Against a current total of 12 other teams’ for the two rounds; Stanley believes his main rival will be fellow Australian V8Supercar driver Nathan Pretty. However he doesn’t discount form Kiwi’s Reg Smith (Taupo) and Sam Newdick (Hamilton).

“I’d have to say Nathan (Pretty) would be the main contender. If the boat he’s jumping in to is as competitive as I’m led to believe it is he’ll be tough to beat, especially as it’s a near new package.

“We’re campaigning a boat that is about six years old but I feel we’re up for the job and I’m sure there are a few locals who are going to be tough to beat.

Stanley has been warned to prepare for any kind of weather, after the recent Jetpro New Zealand championship round held in the Wairarapa was cut short due to a heavy rain storm.

The husband and wife team get their first look at the track on Saturday 11 February, with preliminary qualifying held in the afternoon. Final qualifying and eliminations take place on the Sunday with the programme repeated the week later (18-19 February) at Wanganui to decide the world champion.

Additional entries to the event include the New Zealand domestic Jetpro Jetsprint championship Lites competitors, who will challenge for an event trophy, as their boats are ineligible for world title contention.