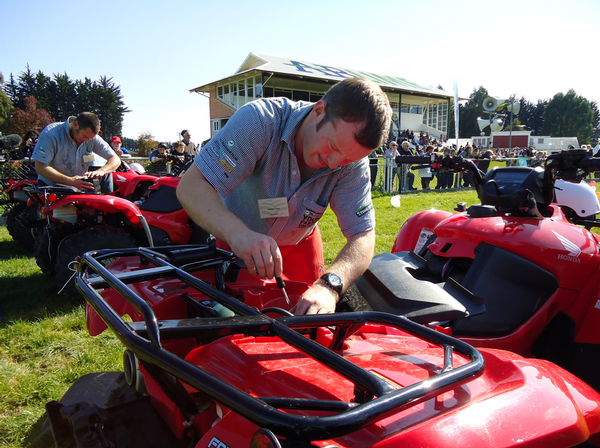 Regional Finals kick off in Balclutha

Balclutha will play host to the first Regional Final of The National Bank Young Farmer Contest this Sunday (February 12th) at the Telford Division of Lincoln University on Owaka Highway.

Peter Gardyne (24) was second in the Grand Final in Gore in 2010 and is the current Chairman of the Otago/Southland Region for New Zealand Young Farmers. The Waitane Club member is married to Esther and manages a 1600 acre sheep, beef and arable farm. Peter holds a Diploma in Agriculture and a Diploma in Farm Management (both with Distinction).

Hayden Peter is one of four Contestants from the Nightcaps Club this year; he’s also a returning Grand Finalist – he placed fifth in Masterton last year and this will be his fifth Regional Final. On May 1st the 29 year old farmer will take over the lease on the 150ha sheep stud property he currently manages in Winton; he has also recently taken on a role as Technical Officer with the Alliance Group. Hayden has a Bachelor of Agriculture Science (Honours).

Twenty seven year old John White from the Nightcaps Club is competing in the Otago/Southland Regional Final for the second time. He’s currently Operations Manager of four dairy units, milking 4800 cows, and has worked on dairy farms around New Zealand and also in Chile and the United States. John has a Bachelor of Commerce (Agriculture) and is engaged to Renee; they have a nine month old baby Esther.

Dairy farmer Simon Topham is the treasurer of the Nightcaps Club and holds a Bachelor of Commerce (Agriculture). After competing in the Otago/Southland Regional Final in 2010 and last year helping to organise it; the 23 year old is back for his second go at the Contest. He currently manages his family’s second year conversion 500 cow dairy farm.

Thirty year old Nathan Parris rounds out the Nightcaps Club contingent. He has a long history with NZYF and has entered the Contest many times. He holds a Bachelor of Recreation Management and farms a 450ha sheep farm. Nathan is married to Marilyn and they have an eighteen month old baby Sophie.

Simon Paterson is due to become a parent in April with wife Sarah. The 29 year old is Chairman of the Maniototo Club and is returning for his second Regional Final. He has a Bachelor of Commerce (Agriculture) and farms on his family’s 2000ha block which consists of a Merino Stud as well as a commercial merino and half-bred flock.

Twenty six year old Dean Rabbidge is the Vice Chair of the Wyndham Club and also holds a Bachelor of Commerce (Agriculture). He’s engaged to Sarah and manages his family’s 180 cow dairy unit. When time permits he also works on the sheep and beef side of the farming operation.

Craig Moffat from the Clinton Club rounds off the 2012 field. The 27 year old has competed at Regional Final level for the last two years and has a long history of involvement with the Contest. Craig is a farmer on his family’s 250ha sheep farm; he’s married to April and holds a Diploma in Farm Management.

To make it through to the Grand Final in Dunedin in May, the Contestants will need to prove their worth through four different Challenges. First up is the AGMARDT Agri-business Challenge, a written exam that will test their theoretical business skills. The Ravendsown Agri-skills Challenge will then take place throughout the morning; here contestants will complete eight 30 minute practical modules that will test the skills they possess and maybe some they don’t!

The Lincoln University Agri-growth Challenge sees the Contestants facing an interview panel made up of three judges throughout the morning. During the day Contestants will also complete a Silver Fern Farms Head to Head Challenge and finally the big crowd pleaser that is the Silver Fern Farms Agri-sports Challenge kicks off after lunch. In this physical gut-buster Contestants will race against each other to complete a series of agricultural tasks; but the quickest may not necessarily be the victor – points are allocated for both speed and quality.

Contestants then have a couple of hours to prepare a speech and get tidied up for the Evening Show at the Telford Gym from 5.30pm. Here the winners of the various Challenges will be announced and question buzzer rounds will give Contestants a chance to pick up more points before the Otago/Southland Regional Final winner is announced. (Tickets to the Evening Show are $50 and include a buffet meal; they’re available from The National Bank Gore and Balclutha).

Contestants will not only be competing for a spot in the Grand Final but also a generous prize pack worth over $10,000. The pack includes a Honda XR125 two-wheeled farm bike valued at $4000, a $1500 Lincoln University Scholarship, $1000 cash and $500 towards a capability development programme from AGMARDT, $1000 worth of Ravensdown quality fertiliser products, $1000 from The National Bank, clothing valued at $750 from Swanndri and Silver Fern Farms will provide a package of quality produce valued at $500.

AgriKidsNZ and TeenAg Competitions will also be taking place at the Practical Day from 8am and the public is encouraged to come along and support these future farmers as they too try to gain a spot at Grand Final.