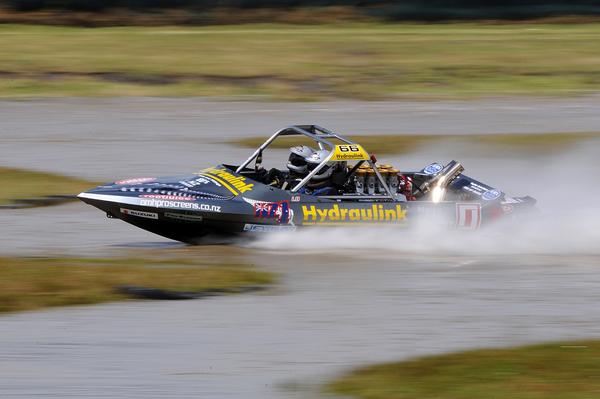 The first of two rounds for the 2012 UIM Wanganui.com World Series jet sprint title starts at Featherston’s Tauherinikau racecourse this weekend 11-12 February, with competitors vying for victory in either the International Group A or unlimited Superboat categories.

Needing to navigate a pre-determined multi-channel water course against the clock, the water jet propelled sport has a penchant for adrenaline and action followers as invariably one of the teams’ will get it wrong – at speed.

Along with 19 Kiwi pairings there are five Australian crews and one Canadian spread across the two categories vying for the bragging rights to their respective world title.

Holding the Superboat crown, Canterbury’s Peter Caughey and navigator Karen Marshall have committed to a late title defence come-back with neither of them having competed since winning the last world series in Australia late 2009. Group A title holders Slade and Vanessa Stanley will also defend their title – using the same boat and engine combination they campaigned for the world crown. Behind them is a large number of Kiwi teams’ race ready and well practised.

Current leader in New Zealand’s Suzuki Superboat category, Wanganui’s Leighton and Kellie Minnell, have three successive round victories for the 2012 Jetpro title, while Hamilton’s Sam Newdick has overtaken defending Whitepointer Boats Group A champion Reg and Julie Smith in the title standings. Having last competed three weeks prior at the same Featherston venue, all, and their chasing peers, are closely grouped performance wise.

Minnell, a relative new-comer, is using the same boat and package Caughey took to the 2009 title. Constant developments since then have the Wanganui businessman quietly confident he can be an equal amongst the more seasoned campaigners. Caughey, a six-time world champion, will campaign a brand new hull, engine and water jet pump combination that has yet to run in competition.

Runner-up to the 2009 Group A world title and having contested every event since its inception in 1997, Smith says this year is his swan-song at the sport’s top tier, but is itching to go one better this time. Making it hard for off-shore challengers, Thames based Bevin Muir and Auckland’s Baden Gray have all been series leaders, with Wanganui’s Richard Murray mixed in the group and Gisborne’s Peter and Rex Briant previous world title holders (Peter had the 2002-2005 Superboat title while Rex won the Group A title last in 2004.)

Canadian Cory Johnson, the current American Superboat champion arrived in New Zealand to contest his maiden Wanganui.com World Series title, less a boat. With the help of Leighton Minnell, Johnson and navigator Gary McNeil are using a Sam Newdick previously campaigned hull, carrying a 434 pro-charged engine and 8.5 inch Scott Waterjet unit combination. It has been affectionately tagged ‘the love boat’, due to the time and effort required to put it together.

“Leighton offered us the ride so why not turn it down right?” said Johnson of his visit to New Zealand for the Wanganui.com World Series.

“Either way we were coming over and were going to watch, learn, take it in like a sponge and compete hard at the next one. We wanted to see the different hulls, how they handle and as the technology is a step ahead we want to learn more to take it back to Canada and the U.S.

“But while we’re here to learn and take in the knowledge, it’d be awesome to finish good, but looking at the competition there is some pretty tough talent. We’re going to try our hardest and do what we can.”

Hoping to have a test run of the boat at a local track, Johnson and his navigator will head to Featherston on Friday to study the course and spend time trying to memorise the 22-turn rotation set for the weekend.

Public have a free and easy chance of getting up close to the boats with scrutineering for the teams’ competing taking place in the main street of Featherston from 9am Saturday 11 February. Then each of the teams’ gets their first run on the water from 12pm Saturday 11 February at the racecourse aquatrack, before the first of two qualifying runs later in the afternoon. A further two qualifying runs Sunday morning will decide the top-16 fastest for the first elimination run. Cut to 12, eight and then five, the three fastest have one last run to decide the round podium placings.

The format will be repeated the weekend later at the Shelter View jet sprint track 8km nor-east of Wanganui, where points from the two events will decide the title winners.