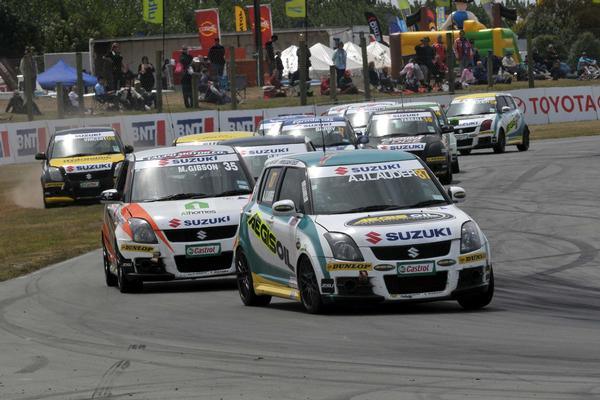 Just over 40 minutes away from Suzuki New Zealand's head office, the Suzuki Swift Sport Cup series will tackle the penultimate round this weekend at Manfeild near Feilding. CREDIT: Lance Hastie

This weekend’s 10-12 February penultimate round of the 2011/2012 Suzuki Swift Sport Cup race series at Manfeild in the Manawatu will be the turning point for the championship title with six races left for rivals to challenge current championship leader AJ Lauder.

Holding a 195 point lead over second placed Shaun Lawrence from Hamilton, Lauder, a 17-year-old farming contractor, has no intentions on letting the advantage reduce this weekend.

Part of the annual New Zealand Grand Prix event, the Manfeild circuit located on the outskirts of Feilding is unique in that the banked turns allow drivers to comfortably run side-by-side through the long sweeping turns without losing track position. As such the racing tends to be closer with cars more likely to touch or ‘rub’. It’s that close proximity that has seen some of the more spectacular racing ‘incidents’ and with a 13-strong entry list out to curb Lauder’s reign, there is a lot at stake.

Each race win is worth 75 championship points and with pre-race qualifying often splitting the top-nine cars by less than a second per lap, there is often fractions in it at the race finish.

“All we need to do is finish every race in the best position we can and we should get there,” says Lauder of his weekend strategy to maintain his title lead around the 3.03km circuit. “So finishing is first and the bonus will be from finishing well – just getting the best points we can.

“Last season we qualified pretty well, but the race results weren’t as good – so nothing is ever certain. Although you get quite an adrenaline rush from the fast corner coming on to the front straight – when you get it right. If you get it wrong it can go pretty bad.”

Suzuki New Zealand’s motorsport manager Darren Stevens says there will be an added presence this weekend, with a number of corporate guests making the short journey from the head office in Wanganui to see last year’s most popular selling small car on the race track:

“To his credit, AJ seems to have an insurmountable lead. He’s worked hard and reaping the rewards of his relaxed style. However there are a lot of drivers’ who’d like a slice of his position and while a number are well outside title contention, they all want to improve their standing to the peril of their peers – be they team mates or not,” said Stevens.

“AJ’s current position means he can comfortably miss two races and still hold a decent points’ lead, something no one else can afford to do. So while they are all going to be chasing AJ down, a wrong move and they will end their championship right there and then.

“Early season leader Mark Gibson (Taupo) saw his big chance to claw back AJ’s lead evaporate in the opening laps of the final race at Timaru when he hit the embankment, hard. Similarly for Chris Cox, who was unfortunate to get tangled in a group of cars during the Sunday morning reverse-grid race in the wet. So it has been consistency from both AJ and Shaun Lawrence that has seen them emerge as the top-two, albeit 195 points apart.

Starting with a test session mid-Friday morning, the drivers’ get a second chance to tweak their setup before hot-lap rides late in the afternoon.

Saturday morning qualifying will determine the afternoon 10-lap race start order. That result will be reversed for the Sunday morning 10-lap race, with the winner starting from the back. The third and final race for the weekend starts at 1:49pm and will cover 12-laps, to confirm the weekend winners.

Registration can be completed on the www.gridkids.co.nz website, or at the track driver signing session: 6:30-7:30pm on the Friday in the ‘Downtown area’. Alternatively registrations can be taken 7-7:45am on the Sunday.

A number of the Suzuki Swift Sport Cup series drivers will participate to further encourage competitors during the event.