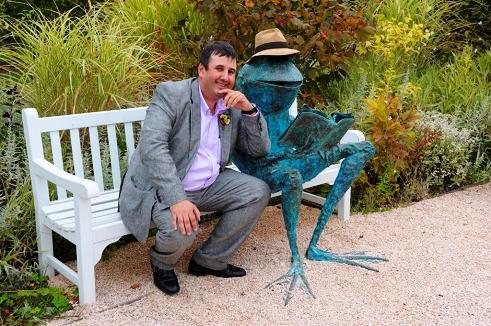 International Garden Tourism Person of the Year 2011 Pascal Garbe from France is coming to Christchurch next month to judge at the Ellerslie International Flower Show.

Pascal, who is the project manager for the Gardens Policy with the Moselle Conseil General and director of Laquenexy Fruit Gardens, says he is “terribly excited” to be heading to the South Hemisphere to judge at Ellerslie.

“From what I have seen in images from the last couple of Ellerslie shows it is an amazing event, equal to those in Europe, such as the Chelsea Flower Show and Hampton Court.”

Pascal is on the panel of judges for the International Garden Festival in Chaumont sur Loire, Canada Blooms and Singapore Garden Festival. He is also a judge for the Plant Days at Courson and Saint-Jean de Beauregard and in 2008 presided over the prestigious rose competition in Orleans.

He has worked both in France and abroad, spending a year working with Princess Greta Sturdza of Vasterival on her garden, near Dieppe, and also in collaboration with such world-renowned gardening design experts as the late Graham Stuart Thomas, Japan’s Shunmyo Masuno, Piet Oudolf from the Netherlands, Great Britain’s Penelope Hobhouse and Sir Roy Strong and Made Wijaya from Indonesia.
Pascal says it will be great to see what is happening on the other side of the world in relation to landscape design.

“We grow a lot of New Zealand plants in our gardens so it will be really interesting to learn more about your gardens.”

Pascal says he will be looking at Ellerslie for gardens which are not only well designed with good planting but that can easily translate into the home garden setting. “I consider that for an exhibition garden to be successful it has to provide people with lots of great ideas for their own gardens.

The first Australian to design a Show Garden at the Chelsea Flower Show in 2004, which won a silver gilt award, Jim returned to Chelsea last year, designing a garden for the Melbourne’s Royal Botanic Gardens, which won him gold.

He competed at the inaugural Singapore Garden Festival in 2006 – winning gold – and has returned to each of the biennial shows and won gold. His last garden at the 2010 show not only won gold but also the award for horticultural excellence.

At the 2009 World Garden Competition in Japan he won gold and Best Design, returning last year to repeat the performance.

This is in addition to the record four gold medals, three Design Excellence awards and two Best in Show he has won at Melbourne’s International Flower and Garden Show.

He is joined at Ellerslie this year by fellow Australian Brian Rankin who has been a regular judge at the Melbourne International Flower and Garden Show and runs his own landscape design, construction and maintenance business in Melbourne.