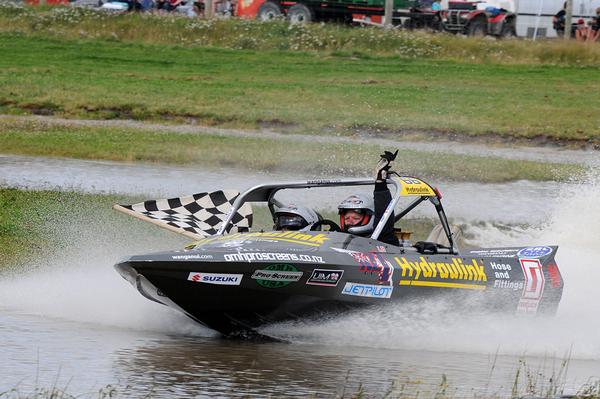 Wanganui's Leighton and Kellie Minnell have won the opening round in the Superboat category of the Wanganui.com World Series jet sprint championship near Featherston. CREDIT: Ian Thornton

“Very happy with the day,” said Smith. “We led from the front for most of it then Sam (Newdick) got me at the top-five and then I got him back in the top-three so it was a good battle.

“It’s a very good place for the Aussies – behind us. But it’s been a lot of fun.

“Winning the first round has certainly given us one hand on the trophy. How much closer can you get to the cup when you win on the first day?

“Now it’s just a bit of housekeeping and the boat will be ready to go for next weekend – that’s the plan.”

Ironically for the two leading drivers’ they are defending New Zealand champions and front-runners for the current 2012 title, which is mid-season.

“Very very happy,” said Minnell who also posted fastest time of the day overall. “We set a few goals today and it was a must win for us – we’re hungry for the championship.
“The horsepower course is next weekend at Wanganui and I knew if we were going to have a shot at the title it had to happen here.

“We managed to lead the qualifying both days which was fantastic. Once we got in to the 42 second bracket we pulled the throttle up a bit and waited to see what would happen around us knowing we could go back there.

“As far as we’re concerned I just wanted to see how much pressure we could put on other teams and what carnage it might create. So our plan went well for us and our Hydraulink team.

“We’re rapt for Ray Ferguson. I think he raced outstandingly. But we’re going home tonight with one hand on that world title trophy.”

While the weather played its part this time; the mix of cloud and sun at the Tauherinikau racecourse made conditions pleasant for the spectators who were entertained by a number of out-of-water racing excursions.

The second and concluding round for the Wanganui.com World Series title takes place next weekend 18-19 February at the Shelter View jet sprint track 8km nor-east of Wanganui.

An initiative from series backer’s Wanganui.com was a live video and audio stream from the venue to their website. A number of offshore viewers were able to keep track of the happenings in real-time.