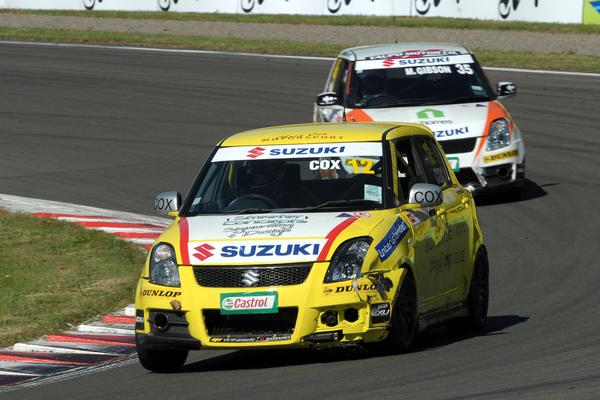 Winning two of the weekend’s three races at this weekend’s penultimate round of the Suzuki Swift Sport Cup series held at Manfeild has given Rangiora’s Chris Cox the round win and a boost to second in the overall championship standings, behind runaway leader AJ Lauder.

The weekend’s final race was shortened when Christchurch’s Hamish Cross was hit from behind, impacting heavily with the pit lane wall and coming to a stop in the middle of the track. Holding a lead of three seconds before the race was stopped, Cox claimed his second win for the weekend, ahead of Taupo’s Mark Gibson in second and Hamilton’s Glen Collinson third.

“My heart goes out to Hamish, but for us it’s been brilliant,” said Cox after the final race. “The car has been good all weekend and the result is a little bitter-sweet after the incidents this morning, but racing’s a cruel sport that’s what happens. But we got the round win and that’s very satisfying after the last round.”

Sunday morning’s second race of the weekend was a full reversed grid – and was expected to provide equal intensity to that of Saturday’s ten lapper. Stretching to an early lead from pole position, Collinson couldn’t hold out Mark Gibson, who’d worked through from seventh to make a sling-shot pass stick in the dying laps of the race. A mere 1.3 seconds behind was Nelson’s Kent Yarrall in third with Saturday race winner Chris Cox finishing sixth after working his way back from an earlier off-track excursion. Series leader AJ Lauder failed to make the race start, having to watch the race from the infield when he broke a front drive joint during the warm-up lap.

Concluding the weekend under summer skies, the final 12-lap race started with Karaka’s Andrew Vincent on pole position with Mark Gibson alongside. Vincent led the 13-car field through the first turns until he dropped a gear along the Manfeild back straight. The sudden loss of speed resulted in the following Mark Gibson making light contact with the rear of the Hydraulink car and allowed Cox and Gibson to slip by.

Cox quietly extended his lead beyond the grasp of Gibson, while Yarrall, Lauder and Collinson duelled for the third place position. Swapping continually it was Collinson who was able to capitalise on a moment when championship leading Lauder and Yarrall locked horns, allowing him a car length on the pair to hold third place to the early imposed race finish.

“It was never going to be easy, especially after missing out on this morning’s race,” said Lauder. “But we managed to come through in that last one. We had a good battle with Glen Collinson and Kent Yarrall – it was nice and clean, but the plan was to get up as far as we could and get those points.”

Suzuki Swift Sport Cup series co-ordinator Paul Burborough commented the weekend was full of hard racing in a heated environment: “It was a real shock to see AJ Lauder park-up during the morning warm-up lap and while it has hurt his championship lead there is no doubt he’s got the fire in his belly to reverse any misfortune. The way he was dicing with Kent Yarrall and Glen Collinson in that final race proved he is not resting on his lead and working hard for every championship point. It’s given a little hope to Chris Cox, that after two race wins and some bad luck by Lauder that he’s taken a big chunk out of the gap Lauder had.”

“Overall I think it was a spectacular weekend of racing at what is effectively our home event with Suzukis New Zealand headquarters up the road in Wanganui. The Saturday race was the best people have seen – and they were comments from those watching.

“It was an unfortunate end to the weekend with Hamish’s car being so badly damaged, especially after he and the Gibson team have put so much in to supporting the series again this year. But it was good to see Chris Cox emerge once again. They are a team who travel a long way for this and we really appreciate their commitment. And also Andrew Vincent, from such a good performance early in the weekend, to have gearbox troubles bring the top run to an early end. So overall a great weekend for our home crowd and it’s made the run to the final round that much more exciting – I can’t wait for Taupo!”

The sixth and final round of the Suzuki Swift Sport Cup series will take place at the Taupo Motorsport Park on 10-11 March 2012.