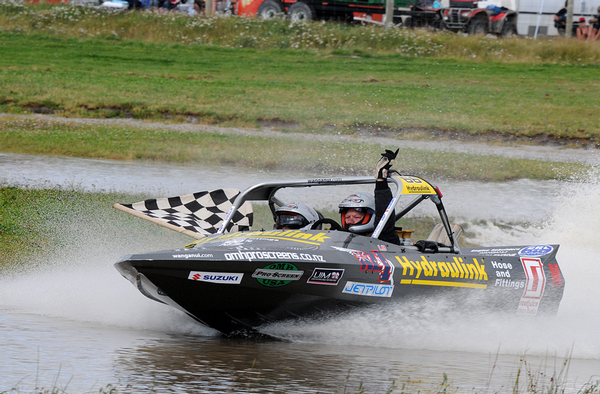 Wanganui's Leighton and Kellie Minnell lead the Superboat standings for this weekend's final round of the UIM Wanganui.com World Series jet sprint championship being held near Wanganui. CREDIT: Ian Thornton 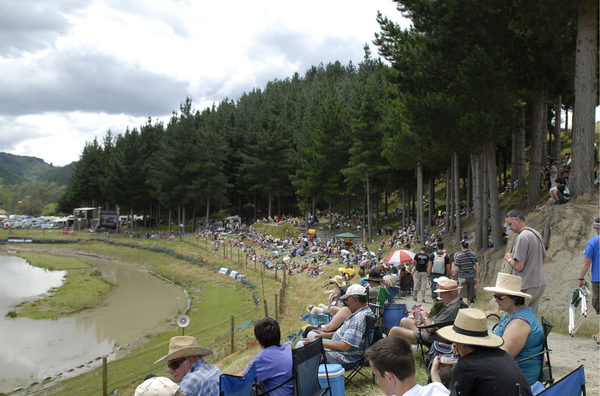 The perfect location for a day away is to pack the family for Wanganui's Shelter View jet sprint track at the final round of the UIM Wanganui.com World Series jet sprint championship being held 18-19 February. CREDIT: Lance Hastie

Contested in two categories: the unlimited Superboat and International Group A, teams’ consisting of a driver and navigator compete against the clock around a narrow multi-channel water course using water jet pump propelled boats. Long supported by action hungry spectators, it combines a picnic and family style atmosphere amidst on-the-limit sprint boats.

Opening the two round series with a clean slate in the Wairarapa, it was Wanganui’s Leighton and Kellie Minnell (Superboat) and Taupo’s Reg and Julie Smith (Group A) who topped the time sheets in the final elimination run. Each followed by a Kiwi team in second, the best offshore teams’ could manage was third in each category.

Against five Australian pairings and a team from Canada, 19 Kiwi hopefuls entered the chase for the coveted title, and enter the final weekend with an outside chance against the two category leaders. Scoring 30 points for setting fastest time in the top-three final eliminations, Minnell and Smith are a solitary point ahead of second placed Ray Ferguson (Lower Hutt, Superboat) and Sam Newdick (Hamilton, Group A). However each has confidence their respective boat packages will perform at what is regarded a ‘horsepower’ rotation.

Minnell says he needed to win that first round to put his opposition on notice: “It was a must win for us – we’re hungry for the championship. As far as we’re concerned I just wanted to see how much pressure we could put on other teams’ and what carnage it might create.”

Runner-up to the 2009 Group A title, Smith says his opening round win was a tit-for-tat battle with New Zealand title rival Sam Newdick. Defending Jetpro New Zealand champion Smith led the first two rounds of the 2012 season with Newdick having only recently taken the helm at the mid-season round.

“Now it’s just a bit of housekeeping and the boat will be ready to go for next weekend – that’s the plan,” said the Taupo businessman.

Current world title holders Peter Caughey (Christchurch, Superboat) and Slade Stanley (Australia, Group A) are languishing in seventh and fifth places respectively. Needing to not only win the weekend round outright, those placed ahead in the standings need to finish an equal amount behind for either to be considered title winners.

“I’m not in a good position to win a world title from, there’d have to be a lot of people very unlucky,” said Caughey, who won the last title in 2009 with current navigator Karen Marshall.

Still, Caughey says seeing the boats he’s built score so high was some consolation: “Leighton won with a 42.43 in the boat we won the last world title in, and what an awesome final with Ray Ferguson and his wife, Nicky. Third was our latest customer boat with Aussie Phonsy Mullan at the wheel.”

Caughey had mechanical issues that prevented him starting the opening round in the brand new boat he’d built for his 2012 title campaign. Amidst great expectation the engine for his self-built boat package will be ready for the final; Caughey says it’s as much for his sponsors as for him: “I’ll be in my new ENZED boat for the final. I’ll be pretty grumpy if not – the engine builder better stand and deliver!”

Located eight kilometres inland toward Upokongaro adjacent to SH4, the Shelterview jet sprint track is surrounded by hillside making for a natural amphitheatre style venue. Perfect for family picnicking, there is a no pets policy due its accredited farm status.

Saturday gives teams’ a chance to learn the track with two un-timed runs before afternoon qualifying starting from 2:20pm approximately. Sunday morning concludes the qualifying, with an official opening ceremony at 11:50am by Wanganui mayor Annette Main, including the Kapa Haka group and national anthems.

Racing begins from 12:20pm, starting with the top-16 elimination. That gets cut to 12, dropping to eight, five and the fastest three shoot-out for the podium.
Adding the points’ from the two events will determine the overall title winning driver and navigator – who will be presented their title crown at a gala dinner on the Sunday evening at the Wanganui War Memorial Hall.

Backed by Wanganui.com, their support of the World Series is part of a campaign to showcase the region’s successful residents who work hard and play harder.