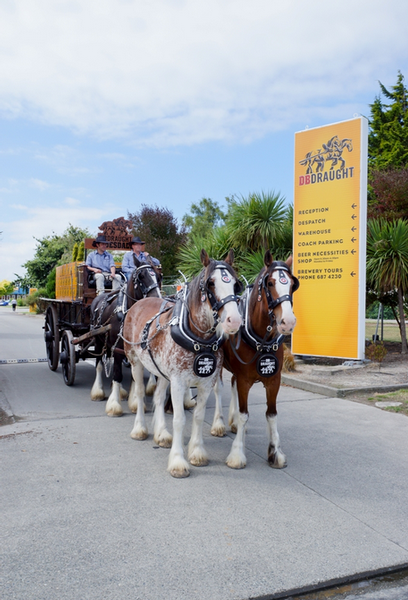 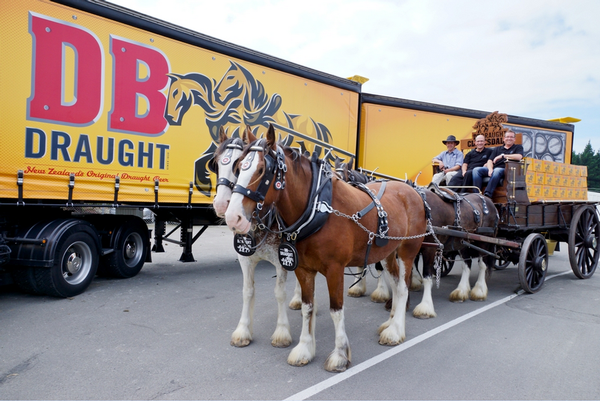 Beer was delivered the good old fashioned way across Timaru today – by horse and cart.

A team of DB Draught Clydesdales pulled a wagon load of DB Draught across town from DB’s Mainland Brewery in Washdyke to the Richard Pearse Tavern in the city centre.

The six kilometre trek was thirsty work for the horses but extremely refreshing for the locals who turned up to enjoy a complimentary glass of DB Draught at the pub redeemed through a voucher in the paper.

The celebration was in aid of 35 years of brewing in Timaru for DB Draught. Up until 1977, DB Draught had not left the watchful eye of sister brewery, Waitemata in Auckland where it had been brewed since 1930. But growing demand for the beer in the South Island led to a shift down country.

DB Draught was instantly adopted by South Islanders as their own, especially during the 80s when the DB Draught Clydesdales graced TV screens in a long-running and hugely popular advertising campaign. Today it remains the number one selling DB beer in the South Island.

DB Draught brand manager, Hamish Yates led the celebrations today and says he and his team couldn’t think of a better way to acknowledge the beer’s milestone by having the Clydesdales deliver a few free beers into Timaru.

“The reception along the way was fantastic. There’s always been a really powerful synergy between the DB Draught Clydesdales and our drinkers and it’s great to see that connection is as strong as ever.”
Yates says the celebration coincided with the revealing of a revamped look for DB Draught with the horses a more dominant feature in its packaging.

“The horses represent strength, determination and hard work, traits South Islanders are renowned for. It’s an honour to be able to enhance their alignment with DB Draught and give the beer a look and feel that fits its 80-plus year history.”

Also included in the celebration was the revealing of new signage for Mainland Brewery which is now to be known locally as DB Draught Brewery.

A spectacular B-Train (a two trailer truck) sporting stylised DB Draught barrel and Clydesdale imagery one the sides was also unveiled. “The B-Train may travel a bit quicker around the South Island than the DB Draught Clydesdales but it’s just as eye-catching,” says Yates.

Yates acknowledged the efforts of the Richard Pearse Tavern and the horses themselves in making the day a huge success.

“There’s definitely a strong sense of ownership of DB Draught within the South Canterbury community and the wider South Island and at the end of the day the brand is theirs, not ours as shown today by the huge number of people that joined in the celebration at the Richard Pearse Tavern.”